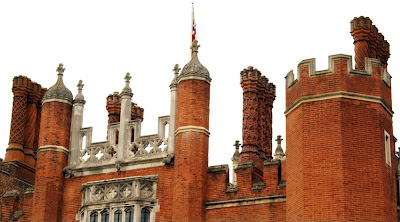 When I went to Hampton Court last weekend, I didn't have time to visit the palace but did manage to snap a few chimneys. (I say a few because there are 241 in total!) 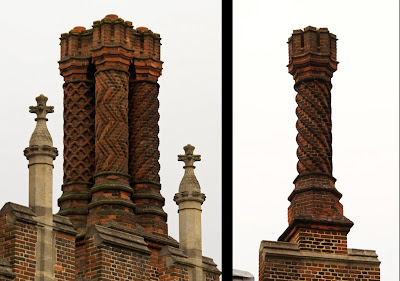 These chimneys were an integral part of the palace's design - although many are now Victorian replicas, since the soft red brick is vulnerable to weathering. Indeed, conservation is ongoing (read about it in detail here [PDF]).

Why were chimneys so important to the Tudors? They were a response to the increasing use of coal, which creates more smoke than wood. The fanciness of these examples was a way of showing Cardinal Wolsey's, and later Henry VIII's, wealth. Spiralling and fluted designs also kept them cooler - important given the limitations of tudor bricks. 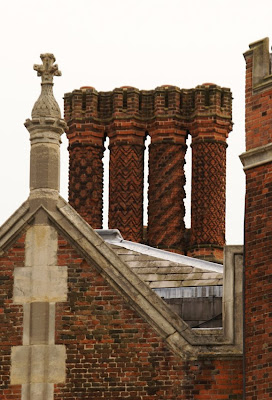 These are fantastic - it truly is one of the best brick buildings in the world. I can see a diapper style on one of those chimneys.

I know almost nothing about brickwork styles - but these have made me want to start learning!

Fabulous chimneys! I used to go to Hampton Court a lot with my parents when I was a kid but only remember the maze!! There are so many wonderful things to see if you look up.

I'm ashamed to admit it, but that was my first visit! I'll be going back soon though.

There's a building at the bottom of Forty Hill in Enfield which has copied these chimneys, although I didn't know when I took the photo (here). Makes me wonder how many other buildings copied the designs! Also, thanks for reminding me I need to go back to Hampton as I haven't been since I was a kid.

Great pictures Caroline, I'm curious to know if you have many more images of these chimneys?