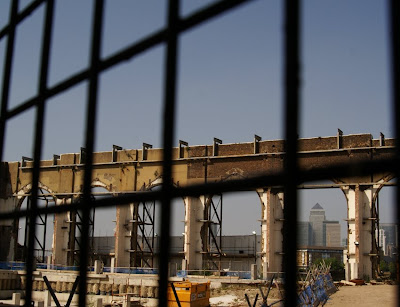 Walking behind the Thames riverfront at Deptford, it's hard to resist peering through fences at an empty shell of a building with elegantly curved windows. It is Paynes Wharf, awaiting redevelopment as part of the now-delayed Paynes & Borthwick scheme. 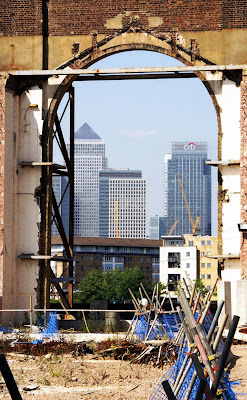 Paynes Wharf was built in 1860 as a boiler workshop by prominent local company John Penn & Sons, marine engineers. Dews's History of Deptford (1883) comments that 'in connection with these works is an Accident and Burial Fund, which provides - for a small monthly subscription - weekly relief in cases of accident, and a sum for burial in event of death of either a member or member's wife.' Penn's played a leading role in shipping's move from sail to steam. Among the ships for which they supplied engines and boilers was HMS Warrior, the first iron warship, now preserved in Portsmouth Historic Dockyard.

The Wharf's facade is Grade II listed, hence its incorporation into the new scheme. (Neighbouring Borthwick Wharf, a former cold store, has been demolished.) The Italianate arches along its facade had a practical purpose: they allowed boilers to be lifted in and out of the building onto vessels on the river. Incidentally, they also made the building one of the more elegant along the working Thames - hard as that might be to imagine at the moment.


These two wharves, along with the Master Shipwright's House, were proud reminders of Deptford's dockyard past and the Creekside Forum campaigned hard for their retention. However, one is gone; the remaining wharf stands as a forlorn shell, in limbo while the developers delay the project because of the current financial situation. Thus the waterfront has suffered the worst of both worlds: pieces of its history gone, but nothing yet replacing them. Thankfully, the Master Shipwright's House is in a much happier condition, an exception to the otherwise depressing state of the waterfront.

Thanks Caroline, I wasn't aware of the wharf's connection to the shipyards.

The planned scheme looks to be a quality one, so I hope it does get built. I love how they call it West Greenwich though rather than Deptford!