Penniless Porch and the bishop's rebus 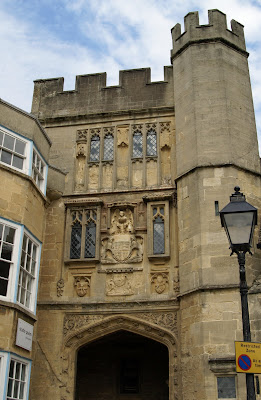 Wells is a small town in Somerset - but has the status of city thanks to its impressive cathedral. Alongside is the Bishop of Bath and Wells's palace, complete with moat and swans who ring a bell to be fed. Among these glorious buildings, though, is this reminder of the more humble inhabitants of the town: a gateway tucked into a corner of the market square, leading onto the cathedral green. Its name, Penniless Porch, refers to its use as a place for beggars to seek alms.
The porch was built by Bishop Thomas Beckington in about 1450. He had been born in Somerset, and went on to enjoy a successful career which included embassies to Calais and Armagnac, a period as Lord Privy Seal and secretary to the King, and involvement in the founding of Eton College. In 1443 he became Bishop of Bath and Wells, and constructed many buildings in the city. He died here in 1465 and is buried in the cathedral: among his constructions was his own tomb. When it was opened during repairs in 1850, he was found to have been a tall man with a well-shaped skull. 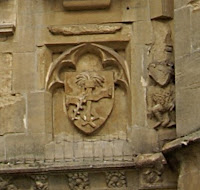 Penniless Porch remains a popular site for buskers: it offers the twin benefits of shelter and a constant flow of visitors passing from town to cathedral. Above their heads, the bishop's name is still there on its front, encoded as a rebus (a pictorial wordplay): a flaming beacon topped by a barrel or tun.

Yes, it's impossible now to see Wells without thinking of the film!

Marvellous - I'm so glad you've done a post on the Penniless Porch. I was going to do one myself, but thought I'd done enough on Wells already. I too always think of Hot Fuzz when I go to Wells - that film gets so many things just right.