Most of us are at least a little surprised the first time we discover that London was bombed from the air in World War I. It's even more surprising, then, to discover that the Navy's involvement with military aviation began years earlier, in 1909. That centenary was celebrated in Greenwich this weekend with a visit from aircraft carrier HMS Illustrious.

Since the Wright brothers only made their first flight in December 1903, it makes sense that the first military aircraft weren't aeroplanes. The navy commissioned an airship in 1909: the event whose centenary is being marked this year. By 1911, it had gone further and had its own aeroplane pilots; it was given 12 aeroplanes (and the army's airships) in 1912, thanks to the support of the First Lord of the Admiralty, Winston Churchill - but under the auspices of a separate Royal Flying Corps. By 1914, though, the navy once more had its own Royal Naval Air Service.
As well as its obviously naval roles (patrolling for enemy shipping and protecting Britain's own), the RNAS was responsible for defending Britain from enemy bombing raids, and even had its own fighter squadrons which served on the Western Front. With such an overlap of functions, it was unsurprising that the RNAS and RFC were merged once more - as the RAF - in 1918. A separate naval air arm only returned to navy control in 1938 - so the centenary isn't quite an unbroken one. 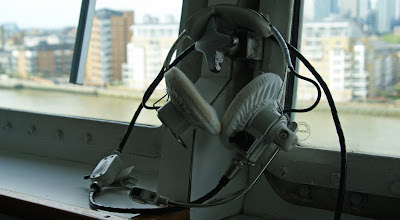 The Fleet Air Arm has its museum in Yeovil, Somerset so this visit was an unusual opportunity for Londoners to find out more about the service. I was fortunate enough to tour HMS Illustrious itself, thanks to IanVisits - I highly recommend his account of the visit here.

While the ship is modern, the concept of an aircraft carrier is not: the navy had 59 by the end of World War II. Illustrious is one of the navy's three Invincible Class aircraft carriers. It was launched in 1978 and formally commissioned in 1983; a major refit in 2003-4 included a total rebuild of the ski jump. The ship can carry up to 22 aircraft. These include not only Harrier jets but also helicopters, which joined the fleet in the 1960s. 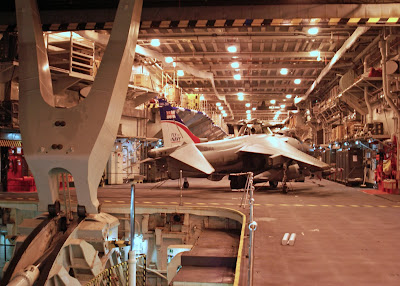 However, these ships will soon be replaced by two new carriers (known as Future Aircraft Carriers), three times their size. Since they will be too big to travel so far up the Thames, this weekend might have marked the last visit of an aircraft carrier to Greenwich. 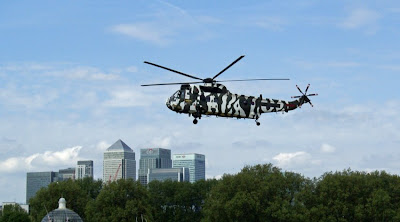 Little Nan, the elderly lady who lived next to us in Charlton many years ago, remembered the Zeppelin raids on Lambeth in WWI. Terrifying looming things in reality apparently.

Yes, the fact that airships proved relatively easy to shoot down can't have been of much comfort when the bombs were falling. The novelty of aerial bombing must have made it even worse.