In Nunhead Cemetery, it is hard to avoid one symbol of life's ending. A downturned torch, representing the snuffing-out of life, can be seen on the cemetery gates as well as many of its graves.

However, there were plenty of other ways in which the Victorians could symbolise the cutting short of a life. Broken columns and cut flowers were popular, their meaning straightforward.

More obscure is the cloth draped across an urn. Although at this time cremation was illegal, the symbol harked back to Classical traditions. The urn was thus a cremation urn, with a funeral pall lying over it. It also served as a symbol for the body as vessel for the soul.

Why a Greek or Roman symbol in an overwhelmingly Christian cemetery? Because for some Anglicans and non-conformists, it avoided any suspicion of Popery (unlike angels, saints and the cross). 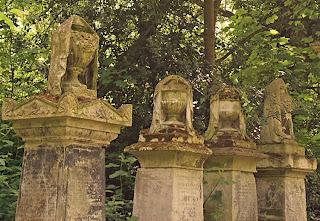 This use of Classical themes would eventually be attacked by Gothic Revivalists, who saw them as pagan and unsuitable for Christian use. Fashion changed once again, to favour symbols of eternal life rather than these representations of mortal death.

A popular myth but one without foundation. Prior to Dr Price cremating his baby son's remains on a Welsh hillside in 1884 the legal position was, perhaps, uncertain. At the subsequent trial at Swansea the judge ruled that there was nothing in English law to prevent cremation of human remains provided that no public nuisance was caused. Two or three other cremations in 1883-4 had been reported in the press but had not been prosecuted.

Regulations made pursuant to the Cremation Act 1902 subsequently made such open air cremations illegal.

Yes, I did simplify as the post wasn't really about cremation - the legal position was indeed uncertain. When the British Cremation Society built a crematorium in Woking in 1879, the local inhabitants objected to the Home Secretary who refused to allow the practice until authorised by Parliament (apparently his concern was with murderers destroying evidence). Hence the decision to proscute Dr Price.

The illegality of open-air cremation has of course recently been ruled compatible with the Human Rights Act.

('proscute' should of course be 'prosecute'. More haste, less speed!)

The Home Secretary made a lot of threatening noises about Woking, but the Price case showed that there was nothing he could do. The British Cremation Society itself introduced the safeguard of a second doctor's signature, prior to cremation, that was subsequently enshrined in legislation.

The prosecution was very much a local affair, and Dr Price subsequently sued two police officers but the jury awarded a derisory farthing damages and the judge refused his costs. The other cremations before Price, had been on private land, and no action had been taken.

It is a few years since I visted Nunhead Cemetary; I remember being struck by the number of graves that had anchors as symbols. Anchors were a particular favourite of the Baptists but other non-conformists also used them.

Gothic Revivalists may have criticised classicalism but the use of any sort of symbols, apart from the cross, seems to have faded away around the end of the 19th century and beginning of the 20th.

Yes, the Home Secretary was lucky that the Society agreed to suspend their cremations. (Of course, threatening prosecution was one thing he certainly could do). And they resumed as soon as the Price case established the legality of cremation.

The popularity of anchors in Nunhead seems to be reinforced by the number of people with maritime connections buried there. A nice example of a nautical memorial is the 1902 grave of Ada Mary Nellie Denny, wife of a fleet engineer (it looks as if it was designed for him to eventually join her, but his name has not in fact been added).

A large Nunhead memorial bearing the name COLLINGWOOD, as in Admiral & HMS, and an anchor has, so I was told, no nautical or naval connection.

Ada Denny died in Hampshire aged 46, so perhaps her husband remarried and was subsequently buried elsewhere by the new wife / widow.

Yes, remarriage is my guess too; I do feel for poor Ada, left alone with her memorial themed on someone else's job and a big gap under her epitaph.

I don't know the Collingwood memorial (I'll look out for it on my next visit!) but it sounds like a good example of the ambiguity of so many of these symbols.

Nice blog, This is my first time visiting here.