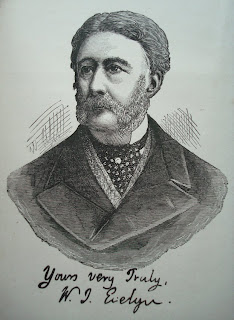 I've just bought a Victorian book, Nathan Dews' The History of Deptford, in the Counties of Kent and Surrey, Compiled From Authentic Records. It is dedicated to William John Evelyn, whose portrait appears as the frontispiece: a marvellously-moustached Victorian gentleman.

Dews' choice of dedication was perhaps an astute one, since William was not just a descendant of the more famous John Evelyn (diarist, contemporary of Pepys and resident of Sayes Court). He would also become Deptford's MP two years later, although only for three years: he resigned the seat in 1888.

William Evelyn's resignation was the result of events in Mitchelstown, Ireland where police shot on protestors and killed three people. Subsequently the government accepted the police version of events and refuse to condemn their actions; Evelyn was horrified by this and resigned from parliament. The by-election which followed would be contested by his good friend Wilfred Scawen Blunt from an Irish prison.

Evelyn now settled down to life in his country home, Wotton House in Dorking, Surrey. His ancestor John Evelyn's grandfather had bought it, and John - a youngest son - grew up here before leaving for London. William updated the house with a Victorian Gothic facade, created gardens, and established a small menagerie including kangaroos, a zebra, chameleons and a seagull. For a while, the kangaroos lived loose on Leith Hill - no doubt startling many passers-by!

A zebra? A seagull? I'm not sure which is the most surprising!

I'm pretty baffled by the seagull.