I'm not going to summarise Sunday's guided walk of Deptford - Andie has already done a brilliant job here. However, it did prompt me to photograph and post about the magnificent houses on Albury Street.

Albury Street was originally Union Street, a name commemorating the union of England and Scotland in 1707. While the south side of the road has been rebuilt with modern homes, the north still has its terrace of wonderful eighteenth-century houses. As a thriving dockyard town, Deptford needed homes for all classes and while labourers might live in wooden cottages, shipbuilders and naval officers wanted something more upmarket. Thus local bricklayer Thomas Lucas built the Union Street homes from 1706; he also built St Paul's Church on the High Street.

Notable residents include John Gast (1772-1837), an early trade unionist, author of radical pamphlets and dissenting preacher. However, he lived not in one of these fine houses but in the King of Prussia public house. Legend has it that Lord Nelson and Lady Hamilton met in one of the homes, but there is no evidence to support this romantic tale. In the early twentieth century, nursery pioneers the McMillan sisters held a Boys' Night Camp at number 24. It provided poor children with the opportunity to wash and get clean nightclothes (the girls' camp was in Evelyn Street). 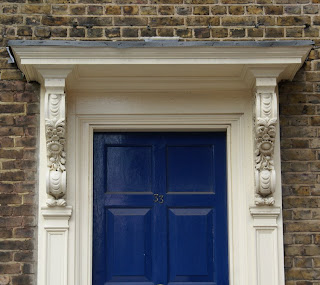 The most distinctive feature of these houses is their magnificent doorways. However, many of the splendid wooden canopies are replacements for originals which were rather mysteriously lost when taken into storage (for their protection!) by London County Council. Master carver Charlie Oldham did much of the restoration work. Now based in Frome, he had his first workshop in Deptford - very appropriately, since it was also the starting-place for Grinling Gibbons.
- June 09, 2009

Whoops - The remaining original houses are on the north side.

The King of Prussia was one of a number of corner pubs in Deptford that over the years 'moved round the corner'. In Gast's time its address was Creek Road.

Jess Steele, author of Turning the Tide, always reckoned that the Nelson story was dreamt up by a Victorian resident trying to increase the value of his house. The myth distracts from Nelson's documented connections with Deptford.

Oops - of course they're on the north, I'll amend that.

Jess Steele's theory rings true; I wonder if it did help sell the property!

My aunt Jeanie lived in number 50 Albury Street and it was handed down history Nelson did reside in her house when on leave. It was aslo said Lady Hamilton stayed in the house next door but one when Nelson was residing there. My father was a who lived at No. 29 Albury St as we all did in the 50's Jeanie asked if he could decorate the upstairs bedroom. Whilst stripping the old, old layers of wallpaper off the parting wall he heard voices coming from the wall. He discovered a small door and when he opened it he found an old walkway from No 50 to the next door but one house which had another doorway in it the ladgen saying this was a discreet meeting place between the two.

sorry for the typos
My father was a "Decorator"

Andy, that sounds very exciting. Did he say if the passage was left in situ? It could be one way of surprising the (near) neighbours!

Yes the passage/walkway was left in situ. My dad told me nobody had walk it in years because the dust was at least an inch thick. When he heard the voices he ran to fetch his brother to listen. My dad was spooked because the house was well known to be haunted. When they returned they stripped the rest of the paper off to find the door. Opposite, next door but one, there was another door. They could hear the people who lived there talking hence the voices.
About the haunting my mother and Jeanie saw the ghost. My mother saw it once standing on the first floor landing, just a dark shape of a man. Jeanie had seen it a number of times as well in the same place and it use to walk into the front room but on investigation nothing could be found. The front room use to be on the 1st floor in them days as people lived on the ground floor and used the scullery(basement area) as the main living area.
My mum and dad use to stay there to keep her company at weekends because of this. After the door was exposed it use to open by itself during the night despite my parents securing the door tightly on the latch. My mother did not like staying there nor did my twin brother and I. We use to have to wait for our mum to pick us up when she finished work as a dinner lady at Creek Road School. The place was spooky I can tell you.

After delving deeper and through research for my blog "olddeptfordhistory.com" my mother told me my Aunt Jeanie did in fact live at 34 Albury St not 50 as I stated.

Thank you for the update, Andy. I've been enjoying your blog as well.

I use to live at 34 albury st when I was very young with my mother and father my father's name was Ted Wilcox and my mother name was pat. And yes I remember it also being haunted