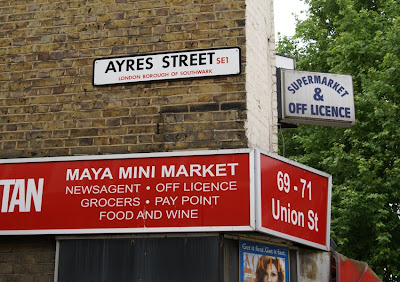 This road may not be one of the best-known in Borough, but Ayres Street is more interesting than it first appears. The name should be familiar to regular readers: it was changed from Whitecross Street in tribute to Alice Ayres, who is also immortalised in Postman's Park. 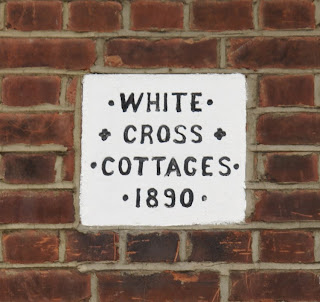 Much of the streetscape would be unfamiliar to her today. Even the very Victorian White Cross Cottages postdate her death. They were built in 1890 by social reformer Octavia Hill, to designs by Elijah Hoole, as model social housing.

Hill was a reformer who campaigned for quality homes and open spaces for the poor. Her most famous achievement was the founding of the National Trust, but housing work was the primary theme of her working life. She began in 1864, leasing three slum properties in Marylebone, and had a portfolio of thousands of homes by the time of her death.

They were managed by a network of female volunteers (and later paid workers) who operated her system of weekly visits to collect the rent. Those visits allowed the women to check the state of the property as well as perform something of a social work role in getting to know the family and help with issues such as finding employment. Further, they ensured regular payment: vital as Hill operated on the 5% principle (investment in such philanthropic ventures should provide a 5% return on capital). Surplus rental income was put into projects including classes and children's playgrounds; tenants were closely involved in those decisions.

The housing scheme grew enormously, and gradually moved from refurbishing existing properties to building new ones as well - White Cross Cottages, along with nearby Red Cross Cottages, are perhaps the most notable survivors. Hill also took over the management of a large number of Church properties which had become slums, including some in Deptford. 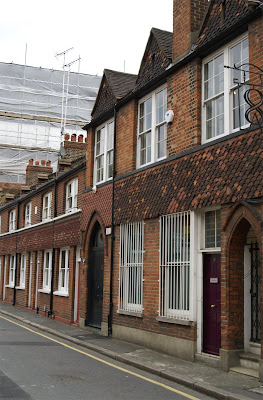 Hill saw quality of life as depending on more than housing and also worked to provide amenities such as community halls. Her campaign for open spaces not only led to the National Trust but also involved her in seeking rights of access to common land and the transformation of disused graveyards into public space. Among her successes was the saving of Parliament Hill Fields from development. She was also involved in the establishment of the Army Cadets.

Most of Hill's principles were admirable: the emphasis upon the self-respect of tenants, small-scale, high-quality developments and tenant involvement. However, for all the radical nature of her housing work, Hill was conservative in other ways. She opposed state involvement in welfare provision, regretting the role of London County Council in providing social housing - thus failing to acknowledge that sometimes, concerted responses were needed to large-scale problems. She attached a great deal of importance to the domestic, seeing it as an appropriate role for women: although her female staff were increasingly paid employees, they were working at a local level in a domestic role. By contrast, she opposed women's involvement in national politics to which she believed they were ill-suited.

Octavia Hill has left a lasting legacy in many areas: housing policy, the establishment of professional housing managers, social casework, provision of public open spaces, and the National Trust itself. That legacy also survives in concrete form in such unassuming places as this Borough side-street.