Eno's fruit salts, made in Hatcham

Men laugh & riot till the feast is o'er
Then comes the reckoning & they laugh no more.
Although this quotation may sound like a reminder of the Last Judgement, in fact it was being used to advertise something far more prosaic: Eno's Fruit Salts. These were made in the Borough of Deptford, at Hatcham. 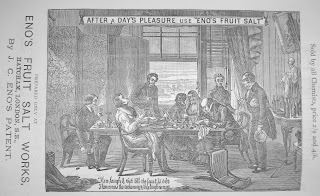 They still make it? And people still buy it? I guess it must really work then!

It probably does - it's mostly bicarb of soda, which will work as a mild antacid on its own, plus citric acid and sodium carbonate. (In fact, it's very similar to Andrews Liver Salts which are also bicarb and citric acid but have magnesium sulphate as their other ingredient.)

It seems to be used a lot as a cookery ingredient in India.

Hatcham is stretching things a little; the factory was at the north end of Pomeroy Street, near the junction with the Old Kent Road.

Eno's Fruit Salts still sell in huge quantities world wide, Brazil is currently the largest market. Do they work? bicarb for fizz and citric acid for a zingy sharpness has to be refreshing if nothing else.

James Crossley Eno's descendent's are a fascinating bunch. His granddaughter Isobel married the Conservative politician Stafford Cripps but was made a Dame in her own right for her humanitarian work in China, and his great, great grandson Kwame Appiah is presently Professor of Philosophy at Princeton.

Presumably he thought Hatcham sounded more classy, distinctive or vaguely bucolic than the alternatives. It's very close, though, to be fair - at least by comparison with modern estate agents' creative expansion of boundaries!

I knew about Isobel but didn't realise that Kwame Appiah is also a descendant.

Do you know anyone who would be interested in buying a rather battered copy of "Shooting Homilies" which was made by Eno's (I would be fascinated to know why? Did they have a keen shot who liked the "If a sportman you would be, listen carefully to me" poem about carrying a gun safely!)