This Nestlé sign in Bury St Edmunds is a close relative, albeit one in rather better shape, to the advert on New Cross Road (left). Both proudly declare that the milk is 'richest in cream'.

I nearly missed this one, as I was walking the opposite way down the street. However, I stopped for a beer in the Old Cannon, which brews its own right in the bar (and it's rather nice). As I looked out of the window, there the sign was - and I'm sure there's a moral in that story! 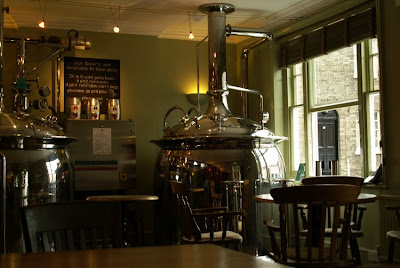 This is a great sign, one of quite a few Nestle examples from round the country submitted to the ghostsigns archive project. A few of these also featured in the Food & Drink video montage.

What is the strange more modern looking ad alongside though? I can't make it out.

Adam, the other ad is a poster - or several layers of posters - and seems to be less-than-recent itself. As best I can make it out, the uppermost slogan is 'for a new so** a new opener'. Soap? Soda? Soup? The image is of a hand holding something. All very puzzling!

Sam, thank you for the links - the montages are brilliant and well worth a look.

The Old Cannon looks fantastic! Is it on New Cross Road?

Sadly not! It's in Cannon Street, Bury St Edmunds.

Aah yes - apologies - now I've read your post properly I see it is quite clear! That's me sneaking a look at your blog when I should be working.