The Heroine of the Fire 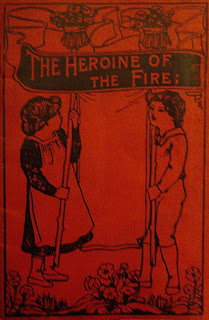 The Religious Tract Society was founded in 1799 to publish interdenominational Christian literature. It was a commercial success, and as a result was able to distribute large quantities of literature around the world.

Among its publications were illustrated tracts suitable for Sunday School distribution, and I have one of these which I picked up a while ago. Back then, The Heroine of the Fire* simply seemed typical of such Victorian moral tales, but re-reading it now I'm struck by how closely it resembles the story of Alice Ayres (although the children saved by our heroine, Nelly, are rather more middle-class than Alice's charges).

When Watts established the Postman's Park memorial, he wanted it to serve an instructive as well as commemorative purpose. However, he was suspicious of conventional religion; that lack of evangelism probably contributes to its enduring resonance and appeal. By contrast, the RTS added a particular Christian spin to its tales which jars with most modern readers.

Thus our heroine Nelly spends most of the story not only being sweet, kind and cheerful but also telling the children how 'the joyous home above' is only a small step and a little time away. She lulls them to sleep with the bedtime story of 'Railston, the pit boy' who is tormented by colleagues for praying while down the mine. Nonetheless, when a pit accident occurs, he gives up his chance of safety to none other than his greatest tormentor. Left to certain death, he gives the man the message, 'Tell dear mother that I did this to show you that my love for Jesus makes me love you.'

That very night, the house in which Nelly and the children sleep goes on fire. Nelly throws the children from a window of the burning house, and then dies in her own fall, like Alice Ayers; dying, she is told that the elder children are safe but the baby is dead. At this news,

A peaceful smile came over Nelly's face. 'Dear little baby,' she murmured - 'the one step taken so soon, so easily. Going home!'

To modern sensibilities, the stories are a combination of the gruesome and the sentimental which we might prefer to spare our own children. However, it is perhaps not only religious sentiment which has changed, but also the harsh reality of child mortality. In a world where many children did die in fires and other accidents, or from diseases and poverty, maybe these tracts offered comfort.

*Or as the front cover has it, The Heroine of the Fire;

What IS that semicolon doing there?

I remember when I was a child that my chapel-going grandparents had a number of these novels. Then, of course, I ignored them because they were 'old fashioned'. Now I'd be fascinated with them as historical documents. The parallels between fiction and real life are interesting and by no means unusual in Victorian novels (George Eliot putting her aunt into Adam Bede, various examples in Dickens and Mrs Gaskell, etc). Victorian writers were not constrained by modern libel laws, it seems.

I think the semicolon is there just to drive me mad! It doesn't even appear on the title page.