On Friday, the London Fire Brigade Museum had a rare open day (IanVisits was also there and has more to say on the museum's very limited opening).

After writing about George Lee and Joseph Andrew Ford, Victorian firemen who died in falls from their fire escape ladders, it was interesting - and sobering - to see some of these machines. 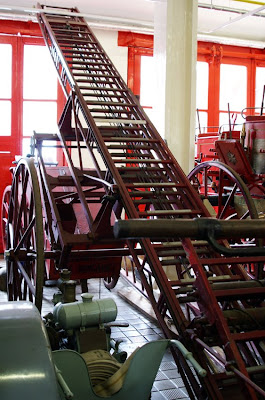 These ladders could reach up to sixty feet, and the thought of climbing that high on such a contraption is enough to terrify me. It's easy to see, then, why chief officer Massey Shaw insisted on employing former sailors. The canvas chutes down which civilians could descend must have been pretty frightening, but presumably less so than climbing down the actual ladders. The model pictured on the left illustrates how they worked (click to enlarge).

The museum also explains that private fire brigades persisted long after the London Fire Brigade took over from the insurance companies, and its exhibits include material from those private brigades. They were usually based in workplaces, particularly those which used hazardous materials. Rotherhithe biscuit manufacturers Peak Freen & Co had their own equipment including a wheeled fire escape. 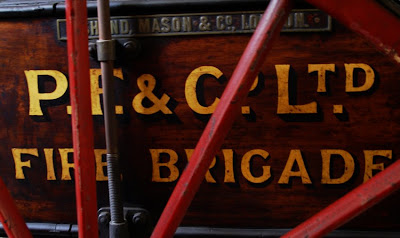 However, it is the public fire brigade to which the museum is mainly dedicated. It tells a fascinating story - one it would be nice to have more opportunities to explore there.
- June 16, 2009

Wow! Looks pretty interesting (and historic too!) museum. Will keep that in mind.