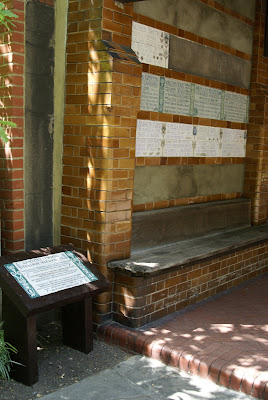 There may be no happy endings to the Watts Memorial stories, but yesterday's Celebration of Postman's Park was definitely upbeat. As I'd already reported, the memorial has been spruced up - and now Watts himself is back in place too! 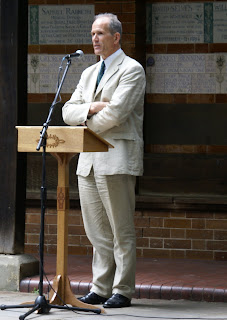 Alongside is a new plaque which explains the memorial. It complements the tiles inside perfectly, and will no doubt help a lot of confused passers-by to understand the site. Sandy Nairne, Director of the National Portrait Gallery, followed the unveiling with a talk on portraying heroism.

Visitors were entertained throughout the afternoon with drama and song. Daniel Hit by a Train from Lone Twin Theatre Company has already toured the UK, but will be back in the Barbican next year. It features all 53 stories from the memorial, yet the extracts performed yesterday indicated that the play will make a much more entertaining, less depressing evening out than that might suggest. 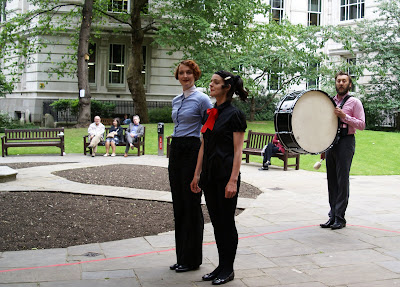 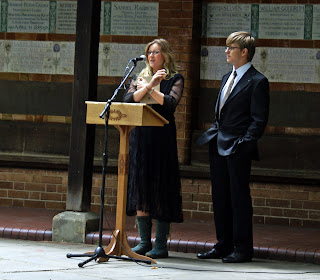 A very different dramatic event, also inspired by the memorial's stories, is the Actors' Temple production Postman's Park. The lives of people commemmorated in the park are reimagined for a site-specific event in St Pancras Crypt, to take place 27 July - 2 August; excerpts from characters including Sarah Smith, Mrs Yarman and Ernest Benning were read.

Baritone Alexander Knox struck a suitably Victorian note with his performance of Heroes of Everyday Life, a George Horncastle and Felix McGlennon song being performed for the first time in 100 years. All that and cream teas as well! 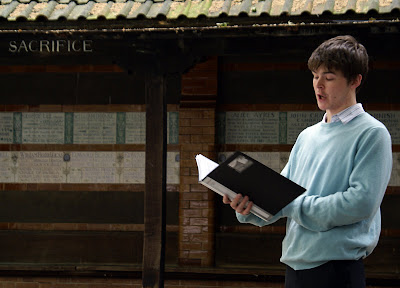 I love the last line of your post! Seems like it was a very entertaining day out, and how interesting to see how much the monument has inspired people.

The dramatic performances were particularly interesting in that sense: two very different pieces, although produced around the same time and from the same stories.

I wish I had been there; would have loved the singing and the dramatic tributes. When I worked in the City, 'Postman's Park'was a favourite refuge at times. And a remarkable and useful reminder of everyday heroism, co-existing as it does with what Hannah Arendt called 'the mundanity of evil'...