Last week, the new Watts Memorial information panel was unveiled, but on Thursday something even more special was added to the memorial: the first new plaque for over seventy years. 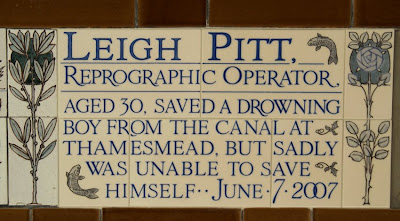 His colleagues, particularly Jane Michele, and his fiancée Hema Shah persuaded the Diocese of London to allow a plaque to be added to the Memorial. It was unveiled yesterday in the presence of the Lady Mayoress.

The Diocese of London have indicated that they will consider other applications for plaques commemorating 'acts of remarkable heroism'. Let us hope that this marks a revival of Watts's vision, and that the Memorial will continue to be an evolving part of London life.

I think it's brilliant that they've restarted the series. I imagine that it gives a lot of comfort to the victims family and friends.

I just saw the plaque today and was really touched. The messages on these plaques are amazing.