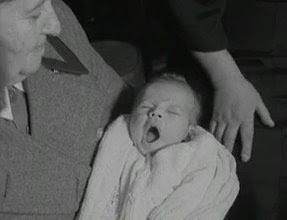 Still on the childhood theme, earlier films show poor children of Deptford, and rather more confident youngsters enjoying themselves at the Rachel McMillan Nursery School in 1939. There's a poignant moment when the voiceover refers to the nursery 'founded during the War': while the film was shot in peacetime, a month later Britain would again be at war.
- July 24, 2009