Both Taunton and Bridgwater have Victorian bandstands - structures which bring to mind nostalgia, summer sunshine, rented deckchairs and cheerful music. Of course, they were pretty practical in reality. Since the British summer is somewhat unreliable, the stand provided cover for the band as well as a bit of help with acoustics.

Many were made in Scotland, including the one in Taunton's Vivary Park, the work of Walter MacFarlane & Co and its Saracen Foundry, Glasgow. It was installed in 1895, and even has a pattern number. Another thing the Victorians could order from catalogues! 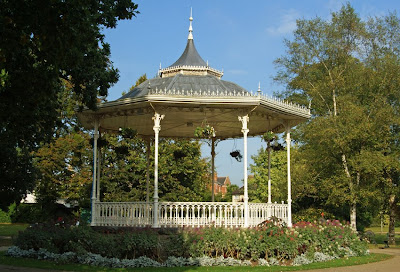 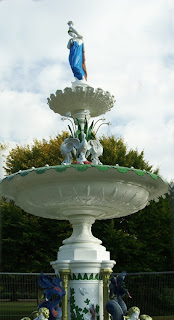 Walter MacFarlane & Co were apparently 'the most prolific architectural ironfounders the world has seen', shipping their products much further afield than Somerset. They were particularly popular in Brazil. MacFarlane himself began working as a jeweller, but after a few years was apprenticed to a blacksmith. In his early thirties, he set up his own company with his brother-in-law and a friend. It quickly became an institution in 1860s Glasgow, and continued to produce ironwork until the 1960s; the name has been revived recently by another company, Heritage Engineering.

MacFarlane's also produced Vivary Park's fountain, which wasn't installed until 1907. This design was so popular that it could be found at Hartlepool, Aberdeen and Singapore!

Bridgwater lagged behind its larger neighbour, only installing the current (brick, wood and tile) bandstand in Blake Gardens in 1908. Sadly, the summerhouse and archway which used to share the gardens have disappeared. 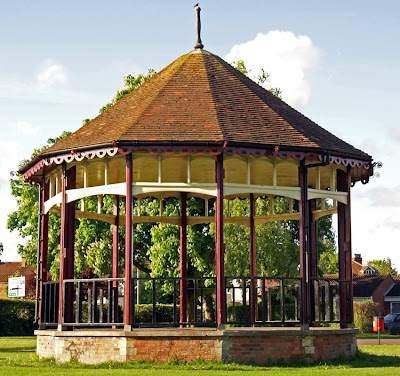 There are quite a few dotted around Paris too, although I've never seen anyone actually play any music in them.

Bandstands for me bring to mind visions of gangs of youths drinking White Lightning and playing loud music. I may have been one of them once...

I love Victorian bandstands, both their architecture and their social history. For family groups who didn't have the money or the inclination to go to more formal musical centres, bandstands in public parks were a perfect opportunity to hear music and socialise.

Australian country towns have some gorgeous bandstands still in place, but I wonder if it is possible to locate their designers or site of manufacture. I must think about it some more.

I created a link to your post, many thanks.

There are still many questions to ask about which families patronised the music? were concerts held in winter indoors? who paid the musicians? why did the interest in bands eventually stop? how patriotic was the music?

Good point about the gangs of youths! I didn't know Paris had bandstands, I'll keep an eye out next time I'm there.

Hels, those are good questions. In Britain, the popularity of bandstands was connected in part to the growth of the brass band movement which perhaps suggests a relatively socially diverse audience. I'll look for more info, though.

It might be worth following the link from Vivary Park bandstand to a directory of ironwork as I've a feeling some of the Scottish firms did ship to Australia too!

Fascinating post. I've always admired bandstands, especially the lovely Victorian iron ones, but never known much about their history, so if you do make further discoveries, it would be great to know.

Thank you - having researched this post, I'm now fascinated by them so will hopefully be doing further posts later.

Bandstands - by Paul Rabbitts, to be published by Shire Productions in February 2011. It has it all!!

I look forward to it!

We have in Bangalre,s Cubbon Park the band stand cast by the MACFARLANE CO.the present generation donot know much about the co. But on seeing the glass house of lalbagh which was fabricted in Glasgow they get surprised by the occuracy with which they are made centuy back.......a great co, i am told it no longer exists..what a pity........santhe narayanaswamy,Bangalore