Cockles from Leigh on Sea 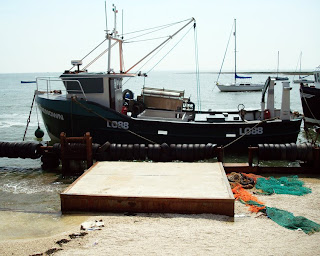 Tuesday's pictures deserve some more information, showing as they do Leigh on Sea's famous cockle industry.

The town was once a thriving Thames estuary port, but a combination of larger ships and the silting up of the deep water channel sent it into decline. Leigh then became a fishing village; its fishing fleet turned its attention primarily to cockles at the beginning of the 20th century.

Fishing methods have changed from the original hand-raking: by the middle of the twentieth century cockling boats were the norm. They played an important role in the Dunkirk evacuations, where the Renown was destroyed by a mine with the loss of all crew.

The arrival of the railway brought benefits to the fishermen, as it enabled them to quickly tranport their catch to Billingsgate Market - as well as bringing visitors, since Leigh On Sea's beach is the closest to London. Cockle sheds line the walk from railway station to town. Many of these have stayed with the same families for over a century. In the hot weather, it's lovely to sit by the sea eating the very freshest shellfish!

It sounds really quite quaint - the only other image I have of the place is from Carter the Unstoppable Sex Machine's "Sheriff Fatman" (the master butcher of Leigh on Sea)!