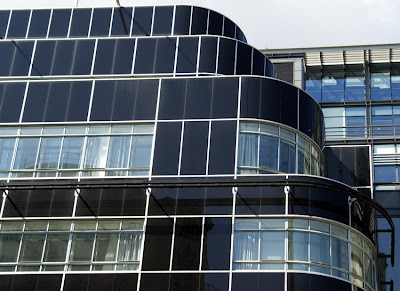 I had always thought of the Daily Express Building, a piece of black-and-silver Art Deco on Fleet Street, as a purely London landmark. However, thanks to a post on the excellent new Lost in Manchester blog, I discovered that it is in fact one of three (with the final 'triplet' in Glasgow). 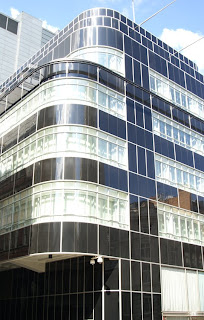 London's version was built between 1930 and 1932 by architects Ellis & Clarke with Sir Owen Williams. He had trained as an engineer before moving to architecture and was responsible for buildings including Wembley Stadium and the Peckham Pioneer Health Centre. After the war, he would build the M1 motorway.

The structure is concrete, with the basement originally holding the printing press and the journalists working on the upper floors. Lord Beaverbrook liked the fact that the glass curtain walls meant Londoners could see his journalists working into the night.

The exterior is a mixture of chromium, clear glass and black Vitrolite. Pilkington manufactured this pigmented glass in a range of colours; it was used for interior tiling as well as external facades. Peer through the gaps in the curtains and you might be able to see the reliefs and exuberant Deco flourishes in the lobby.

The Manchester and Glasgow buildings are by the same architect (Glasgow was built in 1937 and Manchester in 1939) and have similar chrome, glass and vitrolite facades. None of the three are homes to the Daily Express any longer. The newspaper left Fleet Street in 1989; the building was subsequently restored to its current splendour and is now occupied by Goldman Sachs. 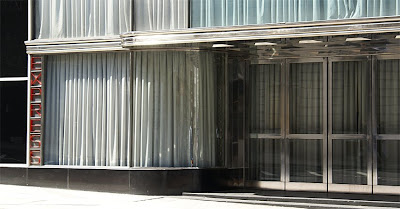 I like this building too - it's so much nicer than many structures of today. The Art Deco style can be a bit 'boxy' and bleak at times but this building isn't.

THis is a fantastic building and I'm interested to learn there are versions in Manchester and Glasgow.
Cheers,
David

Thanks for these pics - it's lovely to see one of the other triplets. Cheers!

Owen Williams also did the 1930's Boots factories in Beeston, Nottingham. And something at Heathrow I think.