The deceptive appearance of Lille Cathedral

Lille Cathedral was an ambitious project, begun in the nineteenth century. It was intended to house a statue of the city's patron, Notre Dame de La Treille (Our Lady of the Arbour), in the most beautiful, sumptuous Gothic cathedral of the time. A site in the heart of the old city was chosen: the former castle mound.

However, like many major building projects, the cathedral took a lot longer to build than expected. The first stone was laid in 1854; the last in 1999. Plans were scaled down as work progressed, and in 1947 a temporary brick facade was put in place; there would be a half-century wait for the permanent replacement. Indeed, looking at the front today one might think that the scaffolding has not yet been taken down. 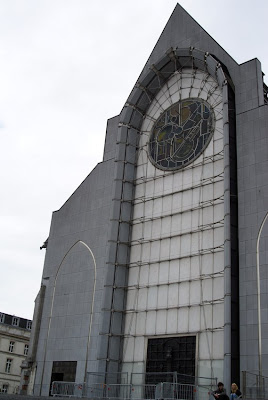 Unattractive as it might appear in sunlight, the wall is rather dramatic when lit from behind. Thus, inside the cathedral during daylight (or outside after dark), the facade is transformed into a translucent marble wall, glowing with rich colour. 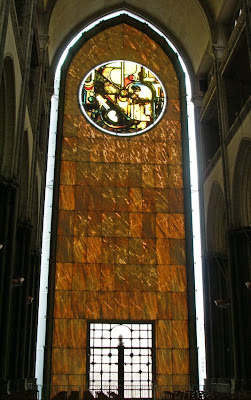 It is the work of engineer Peter Rice and local architect Pierre-Louis Carlier. Inset is a rose window by Ladislas Kinjo, a Polish-French artist, on the theme of the Resurrection. 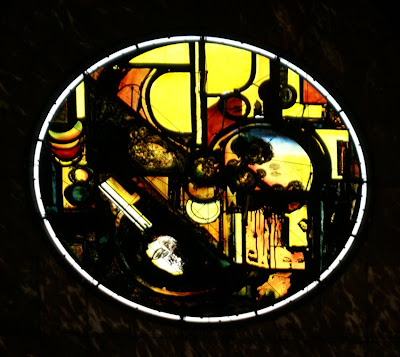 Further viewing: there is a slideshow of the cathedral here (with French commentary).
- July 15, 2009

Email ThisBlogThis!Share to TwitterShare to FacebookShare to Pinterest
Labels: church