A little bit of theatre glamour

Look above street level in Wardour Street, and this fine clock might catch your eye. It's a little piece of theatrical history.

41-43 Wardour Street was built in 1905 for Willy Clarkson, a notable theatrical wigmaker (perruquier) and costumier. The business was clearly at its height when this Edwardian building was constructed. Looking back down to eye-level, we discover from two plaques that none other than Sarah Bernhardt laid the foundation stone in 1904; the following year, it was the turn of Sir Henry Irving to place the coping stone. 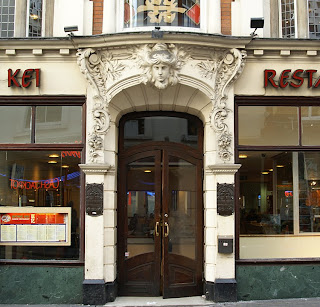 According to the Times review of his biography, Clarkson was a very short, thickset man, 'almost grotesque to look at', but 'a genius at his art ... and as clever as any actor at using his personality for purposes of advertisement.' He made disguises for fancy dress balls as well as the theatre; rumour had it that his customers included Jack the Ripper.

Many of the customers visiting what is now Wong Kei's Chinese restaurant, best known for the rudeness of its waiters, probably don't notice the building with its baroque flourishes and hints of art nouveau. That's a pity, since the entrance is an eloquent visual reminder of some of London theatre's finest moments.