London's earliest timber structure has been discovered by archaeologists working at Belmarsh. It's a wooden walkway older than Stonehenge, which allowed prehistoric residents to cross the peat bog without sinking in. Read the full story of this 6,000-year-old discovery here. 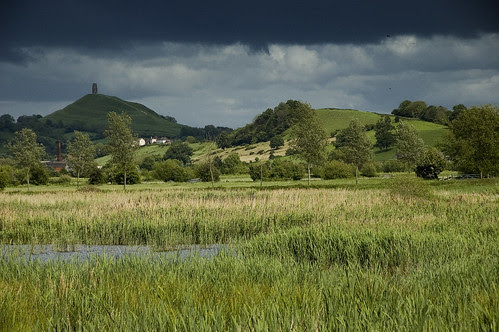 Such structures (there's another at Silvertown, but it's a mere youngster of about 5,000 years old) are not only found in east London. They are also present on the Somerset Levels, another peaty area - the advantage of peat is that it's very good at preserving organic materials. If you fancy walking across a reconstruction, the Peat Moors Centre has one (I strolled along it several times in my youth, when the Centre was a rather more humble affair), while parts of the original track are in the British Museum. Up until now, the Sweet Way across the Levels was believed to be the oldest human-made road in Britain; this new find is apparently slightly earlier.

Image of the Somerset Levels by Joe Dunckley, shared under a Creative Commons licence.

Now that I never knew about - how fascinating, and how close to Peter Ackroyd's view that the history of London lurks under our feet, behind later facades or hidden away in a maze of alleys (related to well-known musings of Virginia Woolf in 'The Waves').
Used to visit Glastonbury & surrounds regularly when lived in Somerset, and the Sweet Track was a particular favourite.