Where the Lyceum Theatre, home to the Lion King, now stands was once Exeter Exchange Royal Menagerie. I heard the story of its most famous inhabitant, Chunee the elephant, and his gruesome death from Chris of One Eye Grey* on a walking tour of the Strand area.

Chunee was the star of the menagerie: according to Lord Byron who visited in 1813, he 'took and gave me my money again—took off my hat—opened a door—trunked a whip—and behaved so well, that I wish he was my butler.' By the time he came to Exeter 'Change he was well used to being the centre of attention, having appeared at the Theatre Royal before the menagerie bought him. On Sundays, he would be taken for a walk along the Strand. 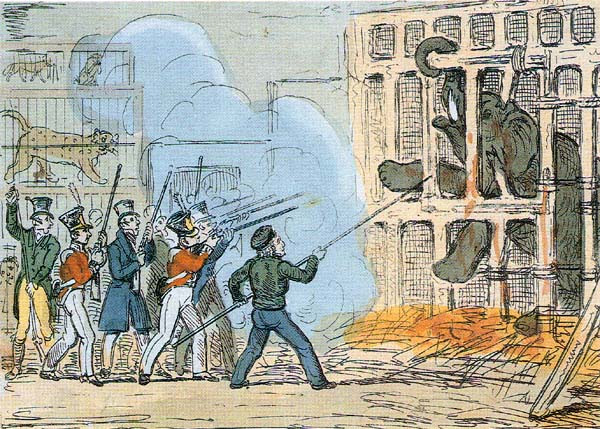 However, the hitherto friendly and docile elephant became decidedly grumpy when he developed a rotten tusk. In February 1826, Chunee killed one of his keepers during their weekly walk. It was decided that he had to be put down, and one of his surviving keepers tried to feed him poison. However, Chunee was obviously suspicious and refused to eat it. Macabre scenes then followed: soldiers with muskets came from Somerset House and shot at Chunee while, at his keeper's command, he knelt down. 152 musket balls were not enough to kill him, and his life was finally ended by a sword. The cage floor was deep in blood. His carcass was dissected in public by surgeons, his skeleton exhibited at Piccadilly's Egyptian Hall (later moving to the Royal College of Surgeons, where it was destroyed by a bomb in World War II) and his hide sold to a tanner for £50.

These horrific events led to public outrage and the transfer of the menagerie to Surrey Zoological Gardens. There was even a play dramatising the events at Sadlers Wells. One reaction has left a lasting legacy for captive animals and the city: the Zoological Society of London was formed and still operates London Zoo today, offering far better conditions to its animals than those experienced by the Exeter 'Change menagerie.

*A penny dreadful for the twenty-first century; new issue out now!

There's a rather amusing poem, written by Thomas Hood, in which the elephant at Exeter 'Change addresses Mr Mathews, at the English Opera House, and complains that when the opera house is open Mr Mathews steals his (the elephant's) audience, meaning that fewer people come to see him 'Pick from the floor small coins, And then turn slowly round and show [his] India-rubber loins'. Marvellous stuff.

Thank you - I've found it here. Worth reading just for the exclamation 'dash my trunk!'