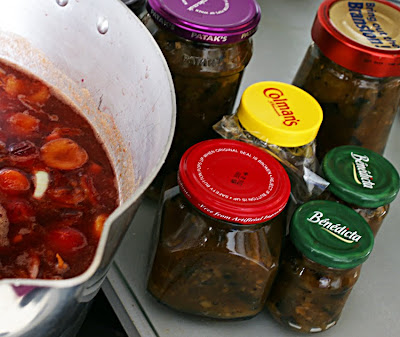 Today, I'm making courgette chutney and spiced plum sauce! The latter is a traditional English savoury sauce, rather than the Chinese version. It's really good with cheese or cold meats, especially pork pie.

Take 1.5kg chopped plums (including stones), a chopped onion and 4 cloves of chopped garlic. (All can be roughly chopped as they'll be sieved later.) Add 1 dsp coriander seeds, 4 cloves, 3 star anise and a cinnamon stick. Put them in a large pan with 700ml red wine vinegar.

Sieve the contents carefully, then return the sauce to the boil. Pour into sterilised jars, seal, and store for a month before eating.

Good to see the Unmitigated Store Cupboard Colmans is in there!