'Down in the depths of dismal Deptford' 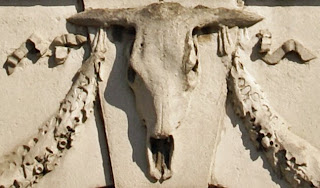 No, the title isn't from another Daily Mail article but the opening line of a feature in the Poverty Bay Herald of 2 December 1898. We've explored the Royal Victoria Victualling Yard in its peacetime heyday, but the amount of supplies it could deal with on a war footing was even more incredible.*

Relations between Britain and France were not very good in 1898; indeed, Britain had been fortifying itself against its neighbour since the 1850s, but competition in Africa was aggravating the hostility. Matters came to a head with the Fashoda Incident, when the two countries came to the brink of war over their colonial ambitions in Eastern Africa. As they prepared for possible conflict, the impact on the Victualling Yard was huge:

The place hummed like a hive of bees with the rush and hurry of hundreds of hard-driven men. Over and over again the visitor was told that such a time of pressure had not been known since the days of the Crimean war. He passed through departments packed to the ceiling with new blue serge suits, thousands of pairs of boots, innumerable bundles of flannel garments, countless caps, and great heaps of canvas clothes.

In the victualling departments he found that the roast beef of old England had given place to German pickled pork, Antipodean preserved mutton, and American tinned beef. Elsewhere were stacked 20,000 tons of pickled and preserved meat, and the process of re-pickling the huge consignments of pickled meat which kept arriving went on ceaselessly day and night. In the biscuit and flour department, instead of the few thousands of pounds usually kept in stock, two million pounds of oatmeal and a million pounds of pease were being got ready for the use of Jack in the expected war; his rum was there, 100,000 gallons of it, being mixed with one part of water to four of old proof rum, in huge vats like miniature seas; and a million pounds of chocolate, to say nothing of tens of thousands of packets of tea and cocoa, were being packed up for his breakfasts and his teas.

Then there was Jack's tobacco - a most important item in the navy victualling business. Ordinarily some 20,000lb are kept in the yard, but when the visitor made his rounds six weeks back a million pounds were being prepared. It is said to cost the Admiralty 5d a pound, and they sell it to Jack at a shilling, which leaves a fair working profit, but cannot be called dear. In the tobacco department the visitor noticed several men filling small flasks with rich, red wine, and asked, with a laugh, what this was for. He was hardly prepared for his guide's grave reply. 'That,' he said, 'is the strongest sign that the authorities are prepared for business. The Yard has not seen the likes of this since the old Crimean days. Those are flasks of sacramental wine, which are being made ready to administer the last rites to the dying sailors.' ...

Other ominous reminders of the ghastly side of war were awarded by the sight of thousands of yards of canvas for shrouds, and by the surgical department, in which wooden operating slabs, miles of bandages, heaps of wooden legs and arms, hands and feet, bottles of jelly and soup, and invalid milk, were mute witnesses of preparedness of one branch of the service for the tragedies of war which happily did not take place.

*Like the report in the previous post, this one may be less than precise on quantities: there seem a suspicious number of round millions!