Great Yarmouth: a night at the circus 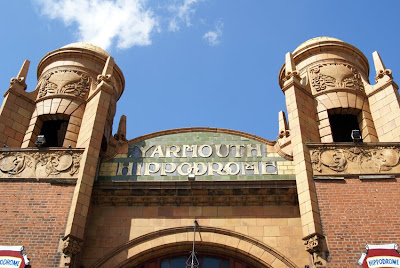 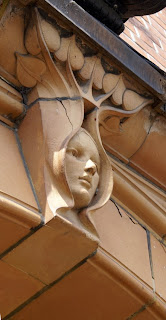 There's something pretty special about experiencing an entertainment which has been fundamentally unchanged for a century. Last year I enjoyed the Palais des Mirages in Paris's Musée Grévin; a few weeks ago, I spent the evening at an Edwardian circus.

One of the most extraordinary buildings in Great Yarmouth is the Hippodrome: one of only two purpose-built circus buildings still working in Britain. It was built in 1903 by architect R S Cockrill for showman George Gilbert, and its detailing is a reflection of the prosperity of the Edwardian resort.

The most extraordinary feature of the building, though, is inside: the circus ring. In the image below, it looks like a very ordinary wooden floor, and for most of the show that's exactly what it is. Circus acrobats, jugglers and contortionists perform a show which, while contemporary, has much of the atmosphere and excitement our forebears enjoyed. (The horses and other animals they would have seen are, however, no longer in the show.) 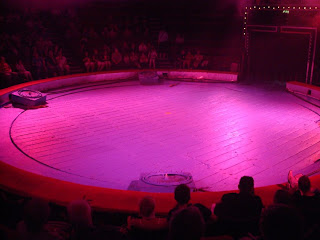 There is a dramatic change for the finale: water starts to flow and the wooden pegs supporting the floor are removed. It drops into a water tank so that the ring has now become a pool. This equipment is original and does not use hydraulics or electricity: the 12.5 tonne floor simply sinks into the tank. Today, the water is heated, filtered and chlorinated for the synchronised swimmers who perform in it - but originally there was no filter and the water, which was also used by performing horses, must have quickly become pretty disgusting for anyone who had to enter it. That's one aspect of the past no one can be sorry to lose!

The Hippodrome used to look directly over the seafront (parts of the Bath Hotel were demolished for the purpose), but today an amusement arcade blocks its view of the promenade. However, the building is thriving in its original role: a unique survivor.

I visited with the Victorian Society; for more about architect R S Cockrill, see Kathryn Ferry's chapter in Powerhouses of Provincial Architecture.

A hippodrome without horses? I went to a similar 'vintage' circus in Paris not so long ago and there were plenty of horses...and dogs, and llamas, and tigers! What I found most disturbing of all though was the ducks which were just chased around the ring and forced to jump over mini fences and run down tunnels.

There is something not quite right about a horse-free hippodrome, but I can't say I miss the circus animals. The ducks sound downright bizarre!

wow,I never thought I would have a reason to visit Great Yarmouth but I would love to see this place!

It's great - I wouldn't usually bother going to the circus but was glad I did here!

I saw this circus in full swing in the 1950s. The water spectacle was truly amazing, a pirate battle with a desert island in the middle. I also loved the gently rocking Noah's Ark on the seafront, which I believe is still there.

A pirate battle sounds amazing - cutlasses or water cannon? I didn't get as far as Noah's Ark but did win some sweets and 'candy sticks' (sweet cigarettes in my childhood...) in the penny arcade.