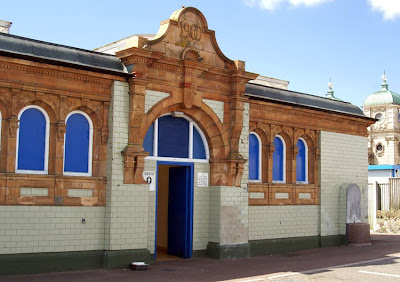 It's not every public toilet that would merit its own post, but this 1900 building on Great Yarmouth's seafront is pretty special. It's one of a pair, along with the neighbouring ladies' toilet. Like the Hippodrome, these charming buildings are the work of J W Cockrill who was borough surveyor at the time they were built. 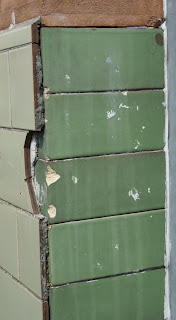 While it's the terracotta detail which catches the eye, the actual construction was rather notable. The building was erected by laying courses of L-shaped tiles, in a design patented by Cockrill, and then filling the shell with concrete, one course at a time: framing was therefore not required. Although the buildings have been re-covered with very ordinary tiles, they have fallen away in places to reveal the rather more interesting originals.

The tiles were used in other Great Yarmouth buildings (and probably elsewhere in the country too). Among these was the tiled plinth for the town's Winter Gardens, the only surviving iron-and-glass example. This building has a rather unusual history. Originally erected in Torquay, where it was not a success, the Winter Garden was bought at a bargain price by the borough and shipped by barge to Great Yarmouth. Apparently, not a single pane of glass was broken in the move. 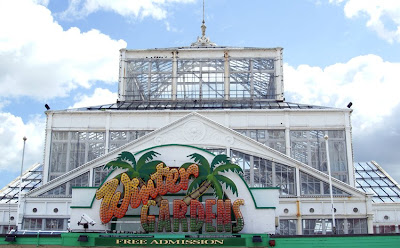 Again, I visited with the Victorian Society; for more about architect R S Cockrill, including his patented L-shaped tiles, see Kathryn Ferry's chapter in Powerhouses of Provincial Architecture.

Terrific! I'd not heard of these tiles, though I did know about the Winter Garden. I must put this Powerhouses book on my reading list now.

i cant believe that winter gardens has closed up.Why cant they just knock it down then rebuild it.i know lots of children used love playing there.i remember when i used to play there and used to keep saying i want to go there everyday even though i didnt but when my dad told me that it had closed i was really shocked.OMG

I think they're still open, but closing from time to time for restoration - or has that changed?