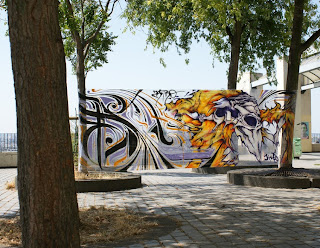 On Sunday, I went to Paris for the day courtesy of Eurostar little breaks. The timing was perfect as I was keen to visit the current show at the Pompidou Centre as well as try the street art-themed walk put together by Adam of the fascinating Invisible Paris blog. Both fit easily into a day and I even had time to look around the Musee Carnavalet, which documents the city's history, before taking the train home.

More about the exhibition later; today, we're on the streets of Belleville. So, what did I see? I'll let the pictures do most of the talking here.

I've referred to panoramas in the title, and Belleville's is amazing. The walk begins at the highest point in Paris (yes, higher than Sacre Coeur), so even after travelling mostly downhill to Belleville Park you're an impressive height above the city. The major landmarks are spread out before you but the spot is much quieter than better-known viewpoints, allowing the luxury of time and space to enjoy it. A secret well worth discovering! And yes, there's more street art there too. 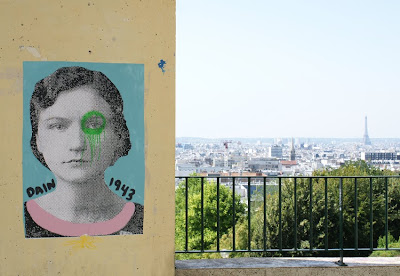 Finally, a plug: do download Adam's walks, which all look brilliant. The documents are lovely, well-illustrated and full of interesting information. Street art isn't the easiest topic for a guided walk, given the ephemeral nature of many works, but I saw all that had been promised. Equally important, the directions were really easy to follow. In fact, I didn't get lost at all, which will amaze anyone who knows me!

Thanks for the links and comments. I'm really glad to see that somebody has attempted this particular walk and that they didn't get lost!

Your photos are really nice ones too.