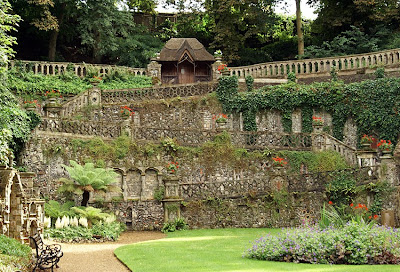 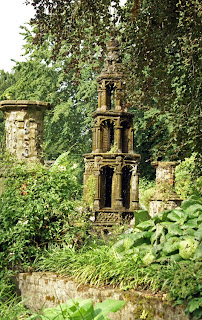 As someone whose mere touch seems to make plants wither and die, I always admire those who manage to create attractive landscapes. I was especially impressed by the Plantation Garden in Norwich: this Victorian quarry garden is being beautifully restored to create an astonishing secret space in the heart of the city.

The site was formerly a chalk quarry, with two kilns to convert the chalk into lime for building mortar. However, when cabinet-maker and upholsterer Henry Trevor bought the land in 1856, he transformed it into a garden complete with all the most fashionable Victorian features: terraces, palms, carpet beds, water features, shrubberies, follies and ruins. After all, Trevor's furniture business depended upon his awareness of the latest fashions. 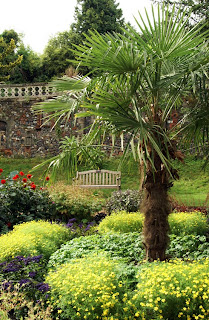 Trevor planned the garden himself, and the fountain in particular is unique. He also used various building materials, creating intriguing features, detail in the garden's walls, and 'ruins'. Gardeners were employed to maintain the planting and the extensive glasshouses.

As well as enjoying the garden himself, Trevor welcomed its use for charitable purposes including flower shows and bazaars. It was overlooked by his villa, now the Beeches Hotel. 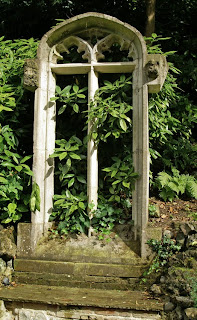 Sadly, the garden began to change soon after his death: the palm house was dismantled by 1912. Its decline accelerated after the Second World War, and when restoration began in 1980 it had become completely overgrown. The Plantation Garden Preservation Trust, though, is doing amazing work in recovering this very special Victorian space. Although some features such as the palm house, with its boilers and hot water pipes, are still absent, the garden's style and atmosphere are once more apparent.

Practical info:
Earlham Road, Norwich (entrance beside the Beeches Hotel).
Open daily, 9am to 6pm.
Teas, with homemade cake, are served on summer Sundays, 2.30-4.30pm.
Admission: £2
Much of the garden is wheelchair-accessible. 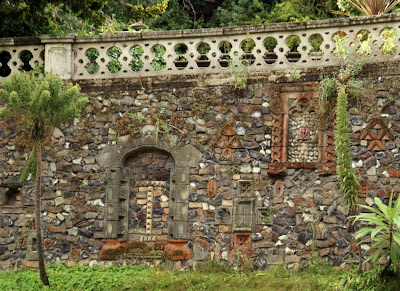 Thank you for this, I will certainly pay a visit.

What a great blog Caroline. A big Thank You from me too. I look after the web page for the garden and I'm impressed by your page.

Thank you for your kind words - I'm glad you liked the page.

Many thanks for a great blog and for giving us some publicity. We hope to see you in the garden again sometime.
From The Chairman of the PGPT and Head Gardener!!

I'll definitely be back as soon as I get the chance - the garden is an amazing place, you're doing wonderful work there!