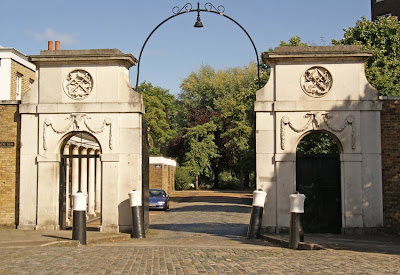 On Grove Road, Deptford is an imposing gateway which leads to a row of houses. The design seems rather odd for a residential area; in particular, the animal skulls add a surprisingly sinister touch. 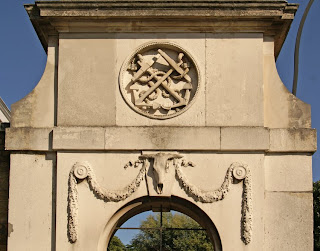 The reason for this incongruous structure is that it was originally the gateway to Royal Victoria Victualling Yard, designed by Samuel Wyatt and unveiled in 1788. The more observant reader will notice a slight oddity here: how can a yard opened half a century before her reign be named for Queen Victoria? The answer is that it was renamed in 1858 following a royal visit (and apparently at the Queen's own suggestion). Before that, it tended to be referred to as 'the Red House' after red brick warehouses formerly on the site.

The entrance has two white arches joined today by a lampholder but originally supporting large iron gates. They are decorated with anchors and two ox skulls. The meaning of the anchors is fairly obvious, while the skulls are a reference to the huge quantities of provisions which passed through. The yard was the headquarters of the Navy Victualling Board, who had warehouses full of food, rum, tobacco, bedding, clothing and medicines on the site; the navy's other victualling yards in Gosport and Plymouth were supplied from here.

Such a major supply operation required more than warehousing, though, and there were also abattoirs, pickling houses, brewhouses, ship's biscuit works, a cooperage, a rum distillery, and mills on the 35-acre site. Some idea of the scale of operations can be gained by a few (fairly random) statistics: in 1878 the stock of medicine constantly held there was enough for 5,000 men for six months, with supplies arriving almost daily; while in 1904 the yard supplied 10,000 bottles of port to hospital ships.

In 1877, 'Snapdragon' sent a description of the Victualling Yard to the North Otago Times, which included the following details:

Let us, then, step forth to see the wonders of the place; and here the neat, clean and orderly arrangement so conspicuous in all our public establishments is especially manifest. The officers houses with their neat trim gardens and croquet lawn; the pay office with its lovely parterres of flowers, and yellow gravel walks; and the long range of river wall and storehouses, make up a very pleasing picture. The great charm of Deptford and Woolwich is the river Thames. The eye never tires of looking at the river steamers, with boats and barges innumerable, and the ships of all nations passing and repassing at all hours of the day. But it is high time to take a peep inside. Here are all manner of stores for the victualling and clothing of the Fleet - pork, peas, wine, porter, rice, chocolate, sugar, tobacco, and what not. First, we are taken to the rum stores, where we see immense quantities of Jack's favourite beverage pure from the still and clear as crystal, for it does not possess its distinctive color till issued for use. There are many rum vats, all very large, built up through floor after floor. Having climbed up by a long flight of steps to the top of the largest vat, containing, I am afraid to say how many hundreds of thousands of gallons (though I was told)* we there find a lid which opens at our feet, into which we dip our tumbler to taste the rum ... Next we proceed to the chocolate mills which we find in full operation, with thousands of sacks standing round, all filled with the precious material. ... From this we go to the biscuit works. The machinery here is perfection. ... We have hitherto been in the buildings looking on to the river, now we are going more inland, to see the Meat Preserving Works, conducted by Messrs Hogarth, of Aberdeen. ... First, in a long range of buildings, we see a number of workmen busily engaged making tins for the meat ... The bullocks are slaughtered twice a week, a hundred and twenty at a time. Now we pass into the boiling-house, where a range of immense coppers are kept boiling. ... We find that two or three teaspoonfuls of the gravy is sufficient to make a pint of good soup. But though the smell is very inviting, and the taste is superb, here we must not linger, but hurry over to the stores - wine, porter, tea, coffee, sugar, pork, peas, rice, tobacco, &c. Then to the clothing department, where we are shown heaps of jackets, shirts, drawers, stockings, boots, and many other articles too numerous to mention. 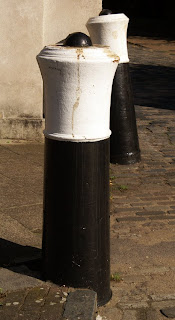 The yard closed in 1961, and most of the site is now part of the Pepys estate, but its gates still remind us of the work which once kept it so busy.

Around the gates are some other features of interest. First, one which is missing: old photographs show that there was a bell just to the right of the gateway. It was cast in 1895 by Gillett, Bland & Co of the Croydon Foundry, who also supplied bells to several local schools and St Luke's Church.

Second, set into the wall is a Victorian postbox. Third, and more conspicuously, four bollards line the short piece of road leading to the gateway. These bollards are eighteenth-century cannon with cannonballs in their mouths. The two nearest the gateway have been leaning for quite some time, since they had their distinctive tilt in photographs of a century ago.

The houses, now known as The Colonnade, are, as Caroline said, part of the Pepys Estate. Along with the Foreshore, they create a dramatic contrast with the majority of the council housing in the area!

Was the RN Victualling Yard serviced by a railway line which went down the centre of Grove Street ?

Hi Caroline. thanks for posting this. I live in one of the old rum stores on this estate and it was interesting to read your article...

Thanks for posting this! I wondered if the bollards were cannons or not...

MARY PENNY I am currently researching my family history - just by chance I came across your blog re the Victualling Yard. My Great Grandfather 4 times removed Adam Alexander Bell b. 1751 died 1825 was head of the Royal victualling Yard. He was by trade a cooper.I would be delighted if there is anybody out there who could add to this informationinformation
Marypenny2015@gmail.com.

Just inside the gates on the left John (Jack) Jones lived in one of the houses on the colonnade, he worked in the yard 1940s up to the 1970s later for the Dept of the Environment work staff.