Having found several Suze ghost signs, I was curious to try the drink itself. Launched in 1889, this wild gentian-based aperitif is celebrating its 120th birthday this year and remains a major French brand.

Suze, distilled from gentian roots, was actually invented even earlier - in 1885 - by one Fernand Moureaux (or he may have bought the recipe from its Swiss creator). However, it was officially launched four years later to coincide with the Paris World's Fair, although it had to wait until 1898 for its distinctive bottle.

In the 1920s, a major advertising campaign was launched - those painted wall signs - and the aperitif has gained iconic status in France. Seven million litres are produced annually; at the end of every year, a special edition bottle is created by designers such as Christian Lacroix, Sonia Rykiel or Thierry Mugler. The drink itself is an attractive golden-yellow, and can be served neat over ice or with mixers. But what does it actually taste like? 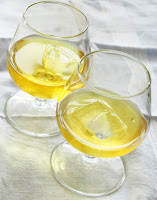 The smell is of toilet cleaner, while the flavour is initially medicinal. That's the high point, though: it soon develops into a bitter taste reminiscent of the liquid painted on fingernails to break nail-biting habits. And that bitter taste lingers and lingers...

It's no surprise, then, that Suze has the same sort of love-hate reputation as Marmite. Since I'm definitely in the 'hate' camp, the only question is what to do with one nearly-full bottle of the stuff!

Here's another one from the South of France near to Olargues.

"...the only question is what to do with one nearly-full bottle of the stuff!"

Well, being the kind-hearted chap that I am, I should be happy to dispose of it for you.

That's a nice one; I still love the signs, but the thought of the drink makes me shudder! Amazingly, it's France's 4th most popular aperitif.

Bill, if there's room in my suitcase for it you're welcome - but I warn you, it's too sticky to make good drain cleaner!

I think I'll stick to my favourite Czech aperitif, Becherovka (made from just alcohol, water from Karlovy Vary, and a mysterious blend of herbs and spices). I do like Marmite, though...

Hope you don't mind - this has nothing to do with your post but I saw this article in the Guardian and thought of you - http://www.guardian.co.uk/artanddesign/2009/aug/26/thames-ball-chain-discovery-museum - I love the idea of an official mudlark. The Thames is indeed a lost world.

There are a huge number of other such strange drinks in France and I've never really tried any of them! I've often been tempted to try a Picon-Bière, but then why would anyone want to spoil a decent drink by putting orangey caramel syrup in it? Nobody ever seems to drink Cointreau either, but it still seems to shift in vast quantities.

Adam, I have to admit to a fondness for Cointreau: it's good in desserts. I've never come across Picon-Bière, though - or Becherovka, Philip.

CMS, what a great link. Thank you!

I am so glad to have discovered your blog, Caroline - greetings to you from the other end of a diagonal line crossing the Hexagone from Finistere to the Med!
Definitely with you on Suze - bit like a truly horrible Danish hangover cure rejoicing in the name of Gammel Dansk, which also tastes revoltingly medicinal!

Ah, thank you - lovely to discover your blog too, and see the sunnier side of France!