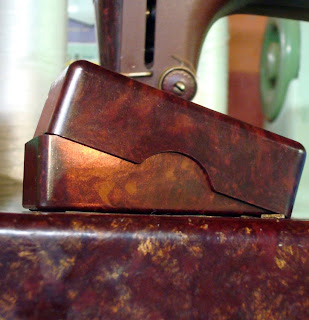 I didn't plan a visit here, but the sign to the Bakelite Museum in Williton, Somerset was irresistible. This private collection is housed in (indeed, crammed into) an old mill, and many of the displays are on open shelves. Some, like a tie press, even encourage you to touch.

If a bakelite collection conjures up images of endless brown plastic, think again: bakelite essentially has two meanings. First, there's the dark material invented by Dr Leo Baekeland who gave his name to the product. The second, looser definition is any early twentieth-century plastic, and a lighter, coloured version had soon been invented so the museum is a rainbow of colours. 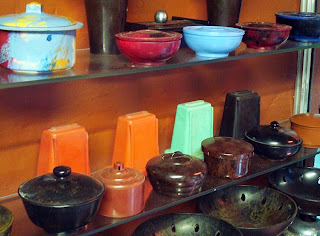 The history of plastics actually goes back even further: a number were invented in the nineteenth century, including celluloid, vulcanite and bois durci - but all were 'semi-synthetics' made from natural materials. (Bois durci, for example, included pig's blood, soot and egg white.) 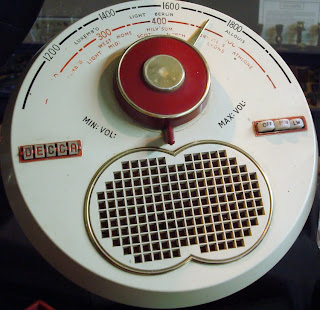 Bakelite was the first synthetic version, using the petrol derivative phenol formaldehyde as a resin. However, the colours of the resin and the wood filler mean that true bakelite has the dark colour we are familiar with. Only in the 1920s - fifteen or so years later - did other resins such as cast phenolic and urea formaldehyde produce lighter plastics.

The museum is stuffed with twentieth-century plastics of all kinds, as well as rare nineteenth-century pieces. Much is unlabelled, but that all adds to the fun of discovery.

Practical info
Orchard Mill, Williton, TA4 4NS
Open easter to the end of September (daily in school holidays, Thursday to Sunday in termtime).
Admission is £4 (paid into an honesty box, although the woman who swept over suspiciously to check my contribution clearly didn't trust much in my honesty!)

Who ever thought we would enjoy collecting, examining and writing about bakerlite? Although I would not have given up my bakerlite radio for anything in the world, it still struck me as ugly and smelly.

But that raises an even better point. Everything that gets destroyed will never be available for future generations to treasure.

I am thinking just now of the very fine Edwardian-Federation houses in Melbourne, pulled down for concrete blocks of flats. Gone... lost... an entire era demolished.

Always found Bakelite rather unpleasant material to handle; no idea why - just a reaction against the texture. But you've somehow contrived to transform what - to me - was an uninteresting topic into a compelling read. I even wish I'd visited the Museum in Williton while living in Somerset ;-)! Chapeau, Caroline, and thank you.

Thank you! It's amazing how time changes our perceptions of ordinary items - we were overcome by nostalgia for the old telephones there, yet I remember the excitement of getting rid of one in favour of a modern, efficient push-button handset.

I think the first time I saw bakelite was the dashboard of a Ford Prefect.

I didn't notice any dashboards in there, but it's quite possible that they have one and I missed it!

My wife and I used to work for the Bank of England where the old desks incorporated a black bakerlite top. The bank finally threw them out 30+ years ago and allowed staff to take one if they wished. We still have ours in the garage!

Hello, This is Patrick Cook, originator of the Bakelite Museum, Yes we have two Dashboards, one from a Ford Prefect and a Morris Series E. However more importantly the Museum is now under threat of closure after a number of visits from the Health and Safety fraternity and have imposed substantial and invasive demands upon the Grade 2 listed Mill. Whilst we naturally understand the safety of our visitors is important, a number of suggestions, demands, recommendations are not only onerous and detrimental, but threaten the very freedom and trust offered to our visitors.


We deserve better than being patronised by a proliferation of 'designer' signs. security on each floor, monitoring of visitors, PAT testing of vintage exhibits ( because they have bakelite plugs on and a visitor 'may plug them in') The list is mainly hypothetical and generally unrealistic.
A new exit for the top floor is a good idea and we are looking into positive ways of raising funds and raising awareness of the present inflexibility in the Fire and Health and Safety authorities that are not only closing museums, attractions, school outings etc but deeply affecting our manufacturers, industry and entreprenurial spirit in the UK.
Hoping you will come along and see for yourselves. Thankyou

I can’t understand why Bakelite would be considered tacky and cheap. It was an incredible material in its time, pre dating modern oil plastics. Components were lovingly designed and exploited the material’s incredible qualities. I loved my Bakelite toys and household items ❤️