Although a London borough in its own right until 1965, Deptford didn't have an official coat of arms. That meant it was in the happy position of being able to create its own, albeit unofficial, version. It's unusually lively and decorative, and each part makes a reference to local history. One imagines the council having great fun with the design! 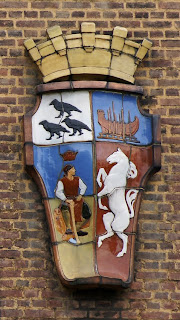 Beginning with the shield, the first (top left) quarter contains three Cornish choughs. These represent Surrey, one of the two counties of which Deptford was part - they appeared on the arms of the Earls of Onslow, major landowners in the county.

The second quarter contains a ship on stocks, and its meaning is fairly obvious: it represents the Royal Dockyard. (When Deptford became part of the London Borough of Lewisham, its arms included a ship for the same reason but it's now a golden ship in full sail.)

That dockyard theme continues with the third quarter: the figure is Peter the Great, the Russian Tsar who visited Deptford to learn about shipbuilding. He is therefore depicted leaning on a log and holding a shipwright's adze. (This is a more dignified alternative to depicting him riding a wheelbarrow through John Evelyn's holly hedge!) I rather like the quirky floating crown above his head.

The fourth quarter returns to the county theme: this time, the white horse is taken from the county arms of Kent. It reappears on the Borough of Lewisham's arms, but as a supporter.
Finally, the crown on top - which should be made of brick - is a reference to municipal governance. In other contexts, the coat of arms also had a background of heraldic dolphins and tridents, again emphasising Deptford's maritime connections. The dolphins have been included in the arms of the modern borough of Lewisham, too.
Further reading: for information about this and other municipal coats of arms, see Civic Heraldry and Heraldry of the World.