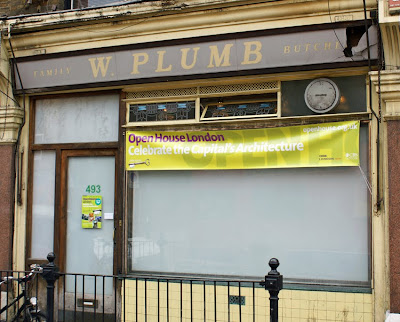 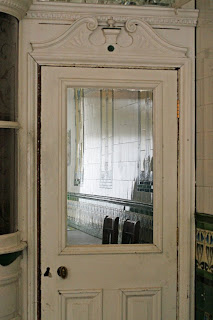 This small property was relatively off the beaten track for Open House, and the other side of London to my usual haunts, but offered the bonus of nostalgia since I used to live nearby. W Plumb was a butchers' shop from the beginning of last century until it closed in 1996 and was left with decor largely intact. As a result, it is now Grade II listed and recognised by English Heritage as a 'rare survival'.

The new owner is planning to reopen the shop, albeit not as a butcher's, while retaining the surviving features. (In the meantime, it's available for short-term hire.) 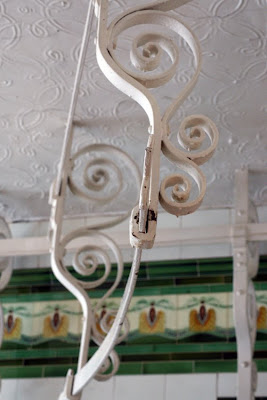 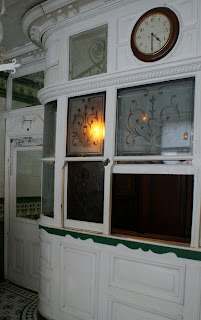 The original owners, the Nolden family (it only became W Plumb after the Second World War) must have been really proud of their shop. With its fancy floor and elaborate cash desk, this is far from the antiseptic white butcher's shop you might expect. Other features include the original tiling - the highlights are two appropriately agricultural scenes - lincrusta ceiling and ornate meat rails. Shopping here must have felt like an occasion; unfortunately, the heyday of such independent stores was well and truly over by the time this shop finally closed its doors.

W Plumb may no longer be a family butcher, but it really is a hidden jewel on Hornsey Road. 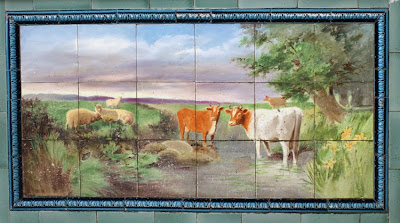 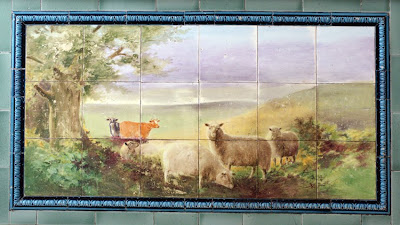 Excellent. I love hearing about these more out-of-the-way open houses. Once again this year, I stuck to venues in Zone 1. Next time I'm going to do what Diamond Geezer did and pick a couple of outer boroughs.

I did some Zone 1 properties as well - I'd never done the Lloyds Building! - but my favourites always seem to be these smaller ones. Today I stayed very local in Deptford.

I only had time to do the Communist party HQ here in Paris (wonderful underground bunker and great views from the 6th floor), and the Musée des Moulages at the Hopital St Louis. 4000 casts of all possible kinds of skin diseases and afflictions dating from the 19th century - truly gruesome stuff, but an amazing historical collection and building!

Both of those sound amazing! Will you be blogging the Musée des Moulages?

The trouble with Open House has always been too much choice, and knowing it's all going on in Paris at the same time just makes the problem worse.

Thanks for the blog, as a fan of old shopfronts I glad to see this one has survived complete with interior fittings.

If you are ever in the esat midlands Oundle has a good former butchers shop with glazed panels depicting cattle and pigs under the shop windows and in Market Harborough the fishmonger's is still an open front shop with the fish displayed on a marble slab (at least in the winter months in the summer its kept in the fridge). The adjacent Butchers shop has a fine pair of fluted Ionic columns either side of the corner door.

Damn. I was only a very short walk away from that butchers on Saturday but completely overlooked it because it was on the Islington page, not the Haringey page.

Yes, I'll be blogging the Musée des Moulages - tomorrow if I can find time!

It was a tricky one because photography is not strictly allowed, but I managed to get a few ambience shots that give a nice idea of the place. At the same time, I don't think many people would like to see close-up photos of the exhibits!

Adam, I look forward to it! Although you're probably right, best not to have close-up photos.

Accountant, thank you - I'm not often in the East Midlands but if I am... Interestingly, there are a few places in fancy bits of London which have revived the open-fronted fishmonger idea.

Caroline: It's online now - and with everything left to the imagination!

Lovely, Caroline. When I first lived in London there were still plenty of such ornately decorated butchers' premises. Slightly off-topic, but are there still eel and pie shops (pie and mash)? There was one near where I lived in NI - Manzi's of Chapel Market, with the original tiles.