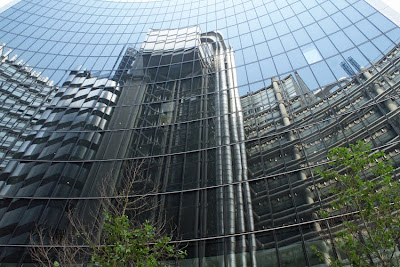 From one extreme to another in an afternoon: as well as the small, quirky and nearly unknown W Plumb Family Butcher, I visited the Lloyds Building. This structure is huge, famous and had a half-hour queue curling round it. Luckily, there were some performers to help the time pass quickly. 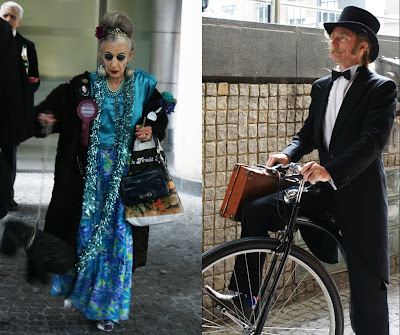 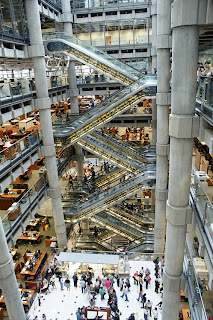 The building is home to Lloyds - the insurers, not the bank. Here, syndicates agree to insure all sorts of risks. The institution began with informal meetings between shipowners and underwriters in Edward Lloyd's coffee shop over 300 years ago, but today is the world's largest insurance market.

It moved to its current premises in 1986, but has kept various pieces of the past. Visitors first see the Room (the underwriting room) on the ground floor. Here are the Lutine Bell, which used to ring announcing news of ships overdue at port (one ring for bad news, two for good), and the losses books which record ships lost at sea. 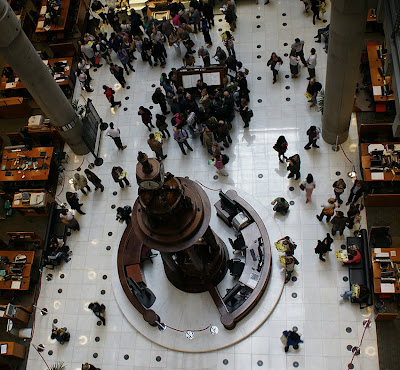 Up on the 11th floor is the most extraordinary survival: an eighteenth century dining room designed by Robert Adam. It was bought at auction in 1958, and moved from the previous Lloyds building to this one thirty years later. The dining room is impressive in its own right, but all the more extraordinary for its location high within this postmodern office block. 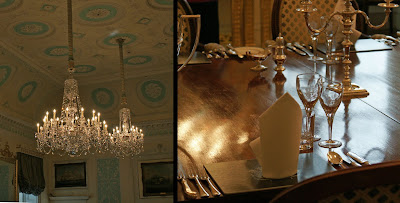 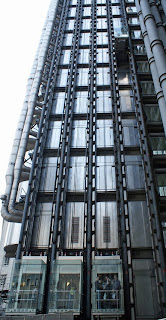 The eleventh floor was reached by the famous lifts: like most utilities (including conduits for electricity and water), they are located on the outside of the building. This unusual arrangement is intended to maximise space, as well as make the lifts more readily accessible for maintenance As a bonus, it also means a chance to enjoy views across London as you travel, which must be ideal for busy City workers! Within the internal atrium, the workings of the escalators are similarly exposed.

The design is thus reminiscent of its architect Richard Rogers' earlier work on the Pompidou Centre in Paris. However, where the functions of the various ducts, pipes and so on are colour-coded on that building, Lloyds is monochrome, suggesting a more serious personality for the serious business of insurance.
- September 21, 2009

Nice photos - I would love to visit that building, and never had any idea that there was such a dining room in there. Who eats there?

You're right, what a contrast to your other visit. Lloyds is the one 'biggy' I've yet to go to on an Open House. I've always been put off by the queue, but half an hour sounds reasonable. Maybe next year. By the way, I love the way Lloyds reflects on the newer Willis Building. That's a great bit of architectural planning.

It really does seem to be one of the fastest-moving Open House queues!

According to the website, the Adam room is used by the Council of Lloyds as a meeting and dining room. Lucky them!

Thank you so much for the virtual visit, Caroline. Worked with a Lloyd's (usually known as 'L of London' to distinguish them from the upstart Lloyd's Bank ...;-)) syndicate 14 years ago. Hate the exterior; but the interior was another story - and you've done the highlights justice.