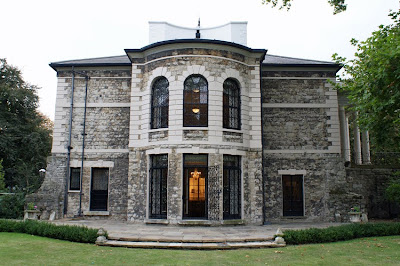 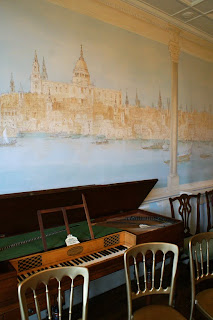 This Palladian villa must be one of Lewisham's more surprising properties. Tucked away on Lewisham Way, its garden walls conceal a unique and rather grand eighteenth-century home.

The Stone House was built by architect George Gibson as his own home. Other commissions had included work for Queen Caroline and Woodlands House, home of banker John Julius Angerstein. Freed here from the need to please clients, though, he produced a house sufficiently eccentric to spend many years under the name the Comical House. 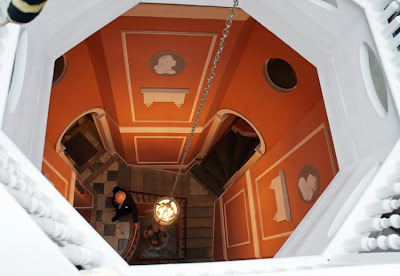 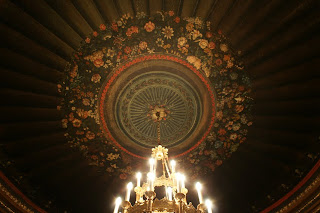 The name would change in the mid-nineteenth century, to the Stone House. Perhaps the (albeit radical) MPs who lived there for much of the Victorian period felt the less interesting name more dignified, given their public position.
One of my favourite discoveries about this house was that it is actually an early example of stone cladding! The building is brick, with an outer skin of stone reputed to be from the old London Bridge. (Careful research by the current owners has established that the story might possibly be true, since material from two arches from the bridge was stored in south-east London at the time). 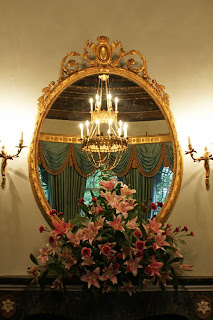 The house has been restored, and has impressive interiors perfect for eighteenth or twenty-first century entertaining. One very contemporary feature is the amazing mural in the dining room, painted by local artist Peter Kent. It shows scenes of the river Thames from Westminster to Greenwich; one of the boats includes the artist himself and flies a flag reading 'PK 1995'.
The grounds include water gardens and rolling lawns. They may have shrunk considerably from the original six acres, but remain another extraordinary feature to find in the heart of Lewisham.
- September 27, 2009

Thanks for this post - I really wanted to get to see this, but there were so many things going on over Open House weekend the only one I got to visit was the eco-retrofit of a Walter Segal self-build property on Walters' Way.

wow, now I'm intrigued to find out exactly where that house is! (gets bike out etc...)

It's more or less directly opposite the Lewisham College Tressillian Building. There's a wall around it, but I think you can see through the gate.

Sue, I missed out on the Walters' Way property - maybe next year...

A policeman I used to know rolled his squad car into the wall of the Stone House back in the 1980s after a long session in the club bar. He wrote off so many police cars he was nicknamed ChiChi because he f***ed Pandas.

Thanks for the virtual tour, Caroline - a real hidden treasure. Love the pix (and the decor). Georgian stone cladding, eh? Intriguing given the period practice of leaving horrors lurking behind pristine facades (notably in Bath)!
I don't suppose any of the stone used from the arches of the Bridge would have been Coade stone would it (know next to nothing about this; would love to know more).

Who owns this property and what goes on there I see very little movement, I live near by.

The owner is my cousin and her mother.Her husband had it renovated and restored back to the condition you now see it. There were some modifications done to it,so that it was easier to get up into the dome and gallery. I used to climb up inside the wall and make my way under low beams for a view down to the inner hall. Look up NADVAS to find out what charity events are held regularly.