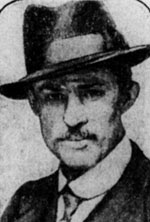 Centred on a house by the river Trieux in Brittany, the Seznec affair continues to make waves in the French justice system. It's a real murder mystery (so much so that it's not even agreed a murder was committed), one whose answer is still disputed.

Guillaume Seznec (left) was master of a sawmill in the Breton town of Morlaix. Among his business associates was Pierre Quéméneur, wood merchant and a conseiller général (roughly equivalent to a county councillor).

In May 1923, the two men took a business trip together, connected with the sale of American vehicles left in France after the First World War. That journey would end with the disappearance of Quéméneur and Seznec's eventual conviction for his murder.

On 25 May, Quéméneur and Seznec left the Hotel de Paris in Rennes in a Cadillac. They were on their way to Paris. Quéméneur was expected back on 28 May, but according to Seznec, he was first meeting an American called Chardy or Sherdly about a major deal involving second-hand Cadillacs. Seznec claimed that because the car kept breaking down, he'd left his colleague at a station where he was to take the train to Paris, while Seznec himself returned to Morlaix. However, Quéméneur was never seen again. 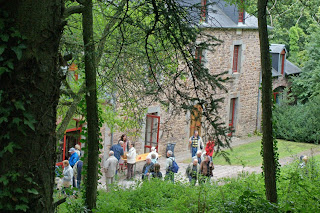 On 13 June, a telegram signed Quéméneur arrived from Le Havre, claiming he wouldn't be back for another few days. The next news came a week later, when a railway employee found his suitcase in the third-class waiting room. Among its contents was a typed sales contract for the manor house Traou Nez (right) to be sold by Quéméneur to Seznec - suspicious both because it was typed, unusual at the time, and because the price was a ridiculously low 35,000 francs.

Seznec had an explanation. He said that he had already paid over $4,000 which Quéméneur needed for the Cadillac sales deal; the francs were merely the outstanding balance. Quéméneur had typed the contract himself.

Unfortunately, this account was contradicted by witnesses who claimed to have seen the two men together on their way to Paris beyond Dreux station. As for the telegram and suitcase in Le Havre, Seznec was seen in the town on the day in question. He had just bought the typewriter used for the contract, using a false name, and forged Quéméneur's writing on the document. Experts also agreed that the teleraph form was in his writing.

There was one big problem with the case, though: Quéméneur's body had not been found. Had he therefore met with some other fate, been murdered in Traou Nez by a third party, or even left the country for America? There have also been allegations of police misconduct as well as conflicting witness evidence.

Seznec's trial began in late October and lasted eight days, with 124 witnesses. On 4 November, he was convicted of murder. The jury did not agree that this was a pre-meditated trap, and he was sentenced to life imprisonment with hard labour. He was taken to a prison in French Guyana to serve his sentence. However, the story did not end there.

Seznec and his family always protested his innocence. He was released early, in 1947, but died in 1954 as a result of a supsicious hit-and-run accident in 1953. This final incident only reinforced doubts about his conviction; the last appeal against it was as recent as 2006. This was rejected on the basis that there was no new evidence casting doubt on Seznec's guilt. The matter therefore rests, but the questions have not gone away.

Meanwhile Traou Nez, the manor house at the centre of the affair, is now a stopping-point on the Paimpol-Pontrieux steam railway. There I discovered this murder mystery - somewhat incongruously while enjoying cider, crepes and rural peace.

Yup, fan of the weird and strange here, too!
Thank you for your compelling account of this mystery.

What a great story. Seznec was imprisoned on Royale, one of the islands next to the infamous Devil's Island. I visited it once - a horrible place. We were given a fabulous French lunch, which somehow made the surroundings with their Papillon associations even more sinister.

Three things to note about a great Whodunit:
1. it was soon after the 1914-18 war ended, when Europe was still in despair.
2. French Guyana.. French colonisation still ruled supreme
3. Joseph Seznec was born in France but perhaps people thought his name was foreign and suspicious. Plus, from the photo, he looks like a bit of a spiv.

Chris, I was intrigued to find out about those bagnes (prison sites especially for forced labour). Visiting sounds fascinating, if unpleasant.

Hels, Seznec sounds like a typical Breton surname - which carried its own, albeit different, prejudices perhaps.

Hi, Corentin Seznec here. He was a very distant relative of mine. His name was Joseph Marie Guillaume Seznec, but he went by Guillaume...
-C. Seznec

Hello, Corentin - thank you for visiting, and for the information about his name.

the doubts about the guilt of seznec stem also from the career of one of the police officers who was accused of having manipulated evidence in the case, pierre bonny. he was convicted for corruption in another case and was a leading member of the french auxiliary forces for the gestapo during the vichy collaboration regime