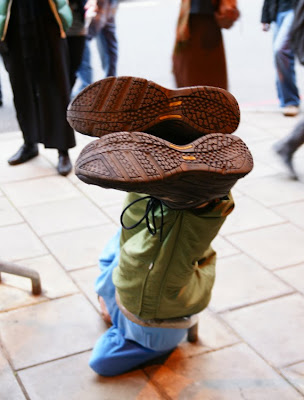 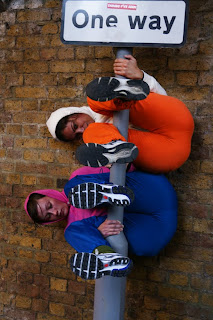 Over the weekend, the area around London Bridge has seen performances of Willi Dorner's work bodies in urban spaces. It involves twenty dancers forming 'human sculptures' along a walking route, for spectators to spot.

I was one of a large number of people who followed yesterday afternoon's performance. The event was in some ways a victim of its own success: since the dancers have to create each 'sculpture' for a limited time before moving on to the next site (and some of the poses are incredibly difficult to maintain), pressure of numbers meant most people saw only 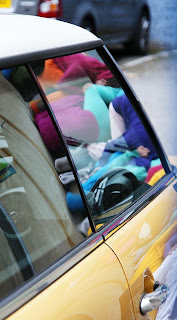 some and arrived at others just as they were ending. The element of discovery was also limited by the presence of a surrounding crowd!

The event, part of Dance Umbrella, was interesting and gathered some intrigued passers-by as it went along. However, the logistics of negotiating through a large crowd on traffic-filled roads were distracting. Some of the poses reminded me of works on the Paris street art walk, and I couldn't help missing the opportunity that had offered to pause and give each piece the attention it deserved.

Interesting, and I think you've identified the main problem with this kind of street performance, where the very mobility of it and its participants is obscured both for and by the audience!