This date on a chapel is more poignant than it might first appear, recording as it does the heyday of a village which has since all but vanished.

Today, Brendon Hill in Somerset is a quiet agricultural spot, complete with fields of cows and sheep. Indeed, the cows seemed curious and not a little surprised at being disturbed by visitors! There's also a house, the chapel, and not much else. 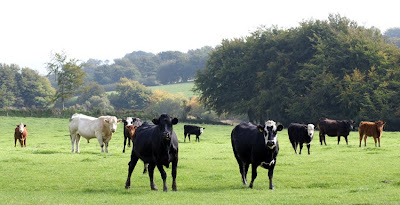 However, in the mid-nineteenth century this was a thriving industrial village. Following the Enclosure Acts, a number of small iron ore mines had set up in the area, and in 1853 one Thomas Brown formed the Brendon Hills Iron Ore Co which brought several mines together. West Somerset Mineral Railway soon followed, taking the ore to Watchet harbour where it was shipped on to Ebbw Vale Ironworks, and the village grew to about 250 people. They had a general store, a church and two chapels, as well as establishments selling coal and building materials. 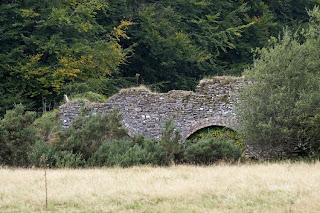 In the early 1880s, though, Spanish iron ore fell drastically in price. Unable to compete, the Somerset company virtually ceased production. Although it would briefly revive around 1908, the company's time was past and the village died with it. The ruins of some structures remain, virtually unnoticed by passing cars and threatening to disappear into the greenery which now thrives in the mines' place.

While most of the village buildings are gone, the railway may undergo a final revival: there is a project currently underway to preserve remaining structures, raise awareness of the railway's history, and improve access to the sites. Not least of these is a winding house which helped bring engines up a 1:4 incline:,some indication of the engineering significance of the railway. This brief but important episode in Somerset's industrial past is getting the attention it deserves.

Chapel names always fascinate me. Biblical place names abound- Bethesda, Bethel, Zion (my grandfather was the Pastor of the one in Wisbech), and not just on places of worship- Mount Ephraim in Tunbridge Wells comes to mind.

Fascinating, Caroline - had never heard of this piece of West Somerset history. Thank you for the excellent coverage, which does indeed make the date on the chapel very poignant.
There's a fair bit of scope for industrial archaeology in Somerset,it seems.

What I like about the Brendon Hills is that the name has several layers, deriving from the OE Bruna meaning 'dark hill', the OE Dune meaning 'hill' and the English word Hill. So the name means Hill Hill Hill.

I didn't know that, Chris - what great naming! Along with the biblical names - it's funny how we can take them for granted, yet they're actually quite strange. As a child, I thought 'Elim' was meant to be 'mile' backwards!

Thank you, Minnie - even having lived there, I forget how much industrial history Somerset has. One of my favourite bits is the planned oil production at Kilve.

Thanks, Caroline, for the ref to oil production @ Kilve, as never had an inkling about it. Thank heavens it failed! Kilve Pill's a gloriously tranquil place to walk by the sea (and, yes, look for the odd ammonite - although youm gotter watch out for them glatts, moi maid, luurk!). And inland there's a beautiful, semi-ruined mediaeval chantry chapel since incorporated into a farmhouse (where cream teas may be had ;-)).