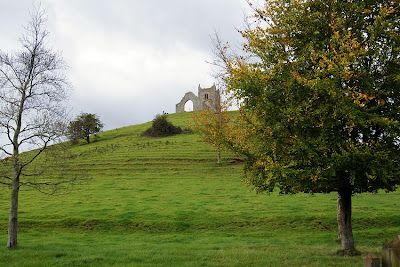 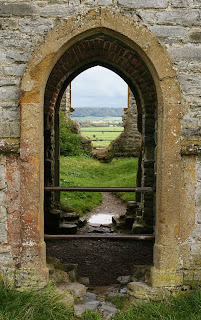 Like a cousin to Glastonbury Tor, Burrow Mump rises unexpectedly from more level countryside and is topped by a church. Both words, 'burrow' and 'mump', mean hill - which perhaps emphasises just how striking its appearance is. Despite appearances, the hill is a natural one; it has probably been used as a place of worship for the past millennium. There have also been attempts to associated it with King Alfred, who did spend time at nearby Athelney, but evidence is lacking.

The current, ruined church is mediaeval and dedicated to Saint Michael. However, the Mump also played a more 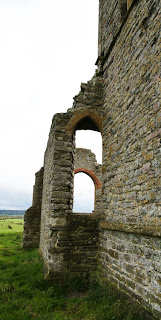 martial role in the seventeenth century when Royalist soldiers took refuge im it during the Monmouth Rebellion. One of them is buried in the crypt.

A new church was built in the village below at the end of the eighteenth century, and the building has now fallen into ruin. Nonetheless, it gained a new function when the owner Alexander Gould Barrett gave it to the National Trust as a memorial to the people of Somerset who died in the First and Second World Wars.

The walk to the top is a popular one - and deservedly so, as the views are amazing. We walked up after rain showers, so the colours were at their brightest and most vivid (and the hill at its most slippery - sturdy footwear is recommended!). 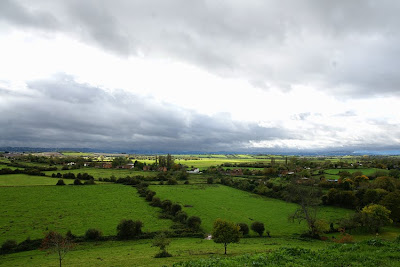 A good word, 'mump'. In Gloucestershire we have 'tumps', which are round barrows - miniature hills, as it were. Humps and lumps are smaller still. It's odd stuff, this language.

Beautiful, Caroline (& one of my favourite places): thank you.
'Tump' is from the Welsh 'tymp', meaning hill/mound - so all have the same, Celtic roots. Historians of the period tend to agree now that the native Celts mostly stayed put after the 'Anglo-Saxons' took over, thus some of their words entered the rulers' language.
Monmouth Rebellion came to a horrible end still part of folk memory in Somerset, Dorset & parts of Devon (taught in schools as 'the Pitchfork Rebellion'). Interesting about the buried soldier: would he have been a supporter of the ill-fated Monmouth or of King James II? Irony of ironies: after all that west country carnage, James Stuart was quietly deposed within 3 years with success largely due to John Churchill, mainly responsible for defeat of Monmouth's rebels @ Sedgemoor.
Ouf! Sorry to rattle on; but all your fault for such stimulating posts (;-))!

The soldier was a supporter of James II. I found that interesting too - growing up in Sedgemoor near the battle site, we tended to think much more about the rebels. As you say, Judge Jeffreys' Bloody Assizes in particular are not forgotten.

Aaargh! Apologies for prolix lecturing tone, Caroline: got carried away, as a lover of history in general & Somerset in particular. Not much of an excuse tho'. Of COURSE the soldier was one of Faversham/Churchill's men - duh. Great post.

Nothing to apologise for!