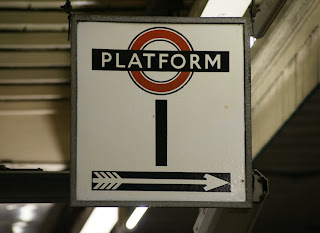 Tomorrow (Thursday 22 October) at 6.30pm, Trafalgar Square is hosting an evening of films about London's transport. Selected from the BFI archives, they cover more than a century and range from Victorian lady cyclists to Piccadilly Circus underground station in 1931 - before coming right up to date with Project One, showing a skateboarder's journey alongside the Thames from the Barrier to South Bank. Pianist Neil Brand will be providing a sound track.

The running time is 90 minutes, so warm clothes and comfy shoes would be a good idea! If the evening is as good as last year's event, it will be worth braving the autumn chill for.

Meanwhile, today's Times suggests that a scene in Underground, a 1928 feature film to be shown on Friday, explains why we stand to the right on escalators. Rather than being an arbitrary decision, it's because early escalators ended on a diagonal so the left foot was still on the moving section as the right foot stepped off. Standing to the right allowed walking passengers to continue on the moving section as they overtook.

Very interesting and, as always, you make one wish to be there, Caroline. Hope you'll be reporting back on these events (I'd love to see the 1928 film; what London must have been like pre-WWII ...). Wrap up warm (& if any consolation, it is unusually chilly here on the Azure Coast - bah! Pas tres azureen, ca!).

On the subject of films and London, last night at The Albany in Deptford for an Urban Screen event and saw two very interesting films about London, The End, about old-style East End gangsters, and Time 2 Get Paid, a look at the hip-hop sub-culture.