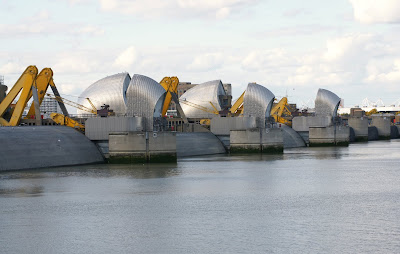 This photo of the Thames Barrier, taken yesterday, is a bit different from my earlier efforts - the barrier is closed.

No, London wasn't at imminent risk of flooding! Instead, the barriers were raised all day for annual maintenance and checks. The Environment Agency had made a real day of it, with stalls and lots of information available as well as free entry to the visitor centre. Most interesting, of course, was the sight of those gates - looking much less shiny than the rest of the barrier, as you'd expect when they spend most of their time underwater. 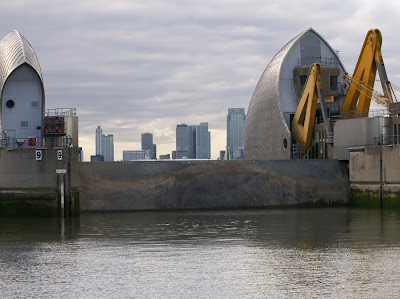 Opening and closing the barrier requires care to ensure that too much change to the river too quickly doesn't cause problems. The barrier was therefore partially lifted in the early afternoon to allow some water to flow underneath, but only reopened when the water to the east of the barrier, still rising and falling with the tide, was at the same level as the water to the west. At about half past four, the levels matched and the gates were opened two at a time. 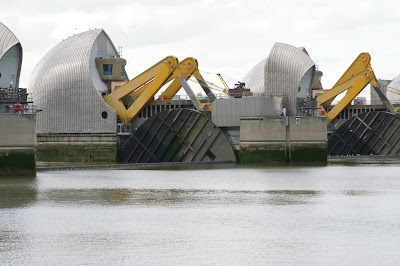 In the picture above, the gates are almost back underwater. The birds taking a ride on the right-hand gate will have to move very soon! However, there's still a way to travel out of sight before reaching their open position with the lines on the 'wheels' back to the horizontal and the gates themselves on the riverbed, safely out of the way of river traffic (below). 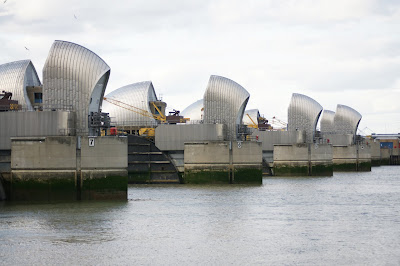 So glad you caught this, Caroline. It's an impressive sight. Haven't been down there for years; but found the project of the time of enduring interest - delighted to read and see more. Lovely post, thank you!

Thank you! I was glad to finally make it to the closure after living down the road for five years, I usually remember to check the date the week after it happens.