Westminster Bridge offers famously impressive views of London: Wordsworth was moved to write that 'Earth has not anything to show more fair'. In particular, the presence of the Houses of Parliament at one end virtually guarantees the presence of tourists photographing each other there. 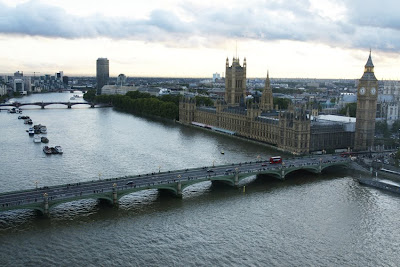 It's not all about scenic sights, though: its history offers a nice illustration of the vested interests affected by the building of new London bridges. When a bridge was proposed for Westminster, the Corporation of the City of London were furious. Until the eighteenth century, they had London's only bridge. As they charged a toll to those who crossed it, new bridges threatened their income. For an indication of how profitable that was, those tolls funded a property portfolio from which the City Bridge Trust would go on to build two further bridges, buy Southwark Bridge from its private owners, and provide much of the funding for the Millennium Bridge. Today it maintains the five City bridges, makes charitable grants and has an annual income of nearly £35 million.

However, the Corporation of London weren't alone in being upset. If you wanted to cross the Thames at any point other than London Bridge, you had to pay a waterman to row you across. These boatmen were highly trained, serving a long apprenticeship in which they learned the complexities of Thames navigation. However, they weren't always popular with Londoners. They were famously insulting, and also notorious for changing the price mid-river. Indeed, one got more than his just desserts when he tried the trick in Deptford in 1764:

On Saturday Evening an Oyster Woman went on board a Ship off Deptford, and on her Return to shore, the Waterman, who carried her, demanded Threepence as his Fare, which she refused; and Words arising, she immediately stabbed him in the Belly with Oyster Knife, for which she is sent to Maidstone Gaol.

Whatever the opposition groups thought, there was certainly a popular appetite for the bridge. It was paid for by lotteries and private capital, and built in 1750; this was the only crossing between London Bridge and Putney, so it proved pretty popular. Indeed, the City was moved to respond by widening their bridge and clearing it of the buildings which had crowded either side. They also built their own new bridge, Blackfriars, which opened in 1769.

Westminster Bridge was so well-used that by the mid-nineteenth century, it was subsiding: the current bridge replaced the original in 1862. It gained a new feature at its southern end for the millennium, the London Eye, from which I took today's photograph.

Wonderful piece of London history, Caroline - a compelling read. And, of course, the existence of the watermen (and much more in the way of river traffic) explains the relative paucity of bridges beyond the City until relatively recently.
I often used to feel the Thames looked strangely ... empty.
There's some amazing footage featuring a very busy Thames further downstream in the old film, 'The Pool of London'.