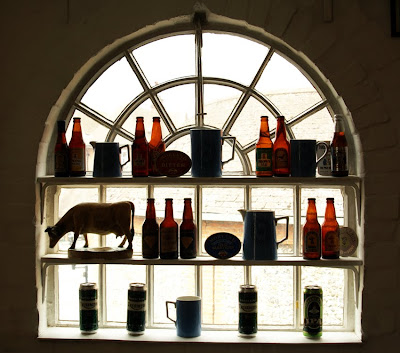 Sorry, but this is even less appetising than the idea of beer from coal! In July 1826, it was reported that

At the Deptford Bench of Justices, on Saturday last, James Waterman, a common brewer at that place, was convicted in the penalty of £100 for having unlawfully in his possession the following articles: Vitriol, liquorice, gentian, honey, salt of tartar, and carbonate of soda. The production of the above ingredients, especially the first, excited a very strong feeling in every one present. The magistrates, E. G. Barnard, Robert Admonds, and George Evelyn, Esqs. severely reproved the defendant.

One can understand the strong feeling: vitriol is better known as sulphuric acid. The crime of vitriol-throwing was known and feared by the Victorians - Sherlock Holmes witnessed it in The Adventure of the Illustrious Client - since the acid was corrosive enough to severely injur and scar. It's difficult, then, to imagine that a drink thus 'enhanced' would be very good for the digestion.

However, the addition of vitriol to beer was not unknown. It gave a bitter taste and thus reduced the need for more expensive hops. Combined with alum and salt, it apparently improved the head on porter and was generally used alongside molasses and gentian to imitate porter's distinctive taste - a handy way of making watered-down beer more appetising.

Food adulteration was rife for much of the nineteenth century, and apparently many Londoners even developed a taste for these products. Ordinary beer just wasn't bitter enough for them!

These days it's salt or sugar - plus ca change ...