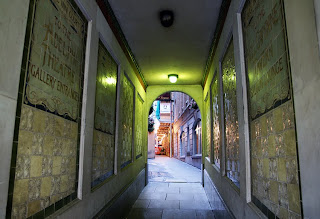 Among the alleyways leading north from the Strand is Bull Inn Court. Here since the 17th century (although the Bull Inn has long gone), it's a handy short cut to Maiden Lane. What make it stand out from its neighbours are the tiled signs at its southern end.

They point the way to the Adelphi Theatre gallery entrance and the Nell Gwynne Tavern. Both entertainment venues came under the same ownership in 1887, when the Adelphi's owners Agostino and Stefano Gatti bought neighbouring premises in order to enlarge the theatre. 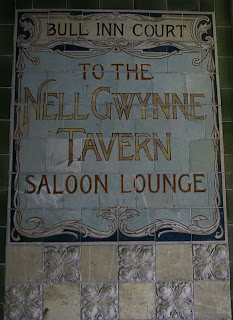 The Adelphi was home to melodrama - and not only on stage. William Terris, who regularly played the hero in these productions, was murdered one night in 1897 while entering the theatre from Maiden Lane. His killer was a rather less successful actor, Richard Archer Prince, whom he had had to sack years earlier due to Prince's heavy drinking. Motivated by a combination of mental illness, jealousy and a belief that Terris was in some way responsible for his inability to find work or financial help, Prince stabbed Terris. He was convicted of murder and sent to Broadmoor (where he did manage to produce and act in plays). Terris's last words were reported to be 'I'll be back,' and it is claimed that he haunts the local area.

The Adelphi was rebuilt in 1930 with a fashionably modern facade. The style of these tiles suggests that they are somewhat older, surviving from its previous incarnation.

Interesting story - would make a great film. Actually, perhaps people producing and acting in plays in Broadmoor would make a better film!