It's that time of year again. Yes, Christmas may be well over a month away but many of the city's lights are on already. As usual, the area around Oxford Circus was among the first to switch on.

Regent Street has mainly stuck with last year's belly-flop stars, but Oxford Street has used the Disney sponsorship money to pay for some new lightbulbs. As a result, the view east of the Circus is enchanting - but look west, and the street has become a giant advertisement.

Carnaby Street has, as usual, gone for something a little more original. The bright colours and sixties-homage designs are certainly fun, but even with inflatable reindeer the scheme is perhaps not all that seasonal. Mind you, when the season is this long... 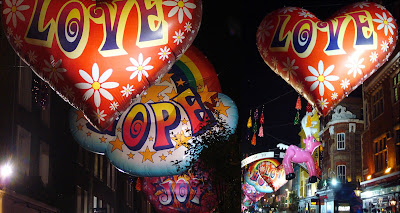