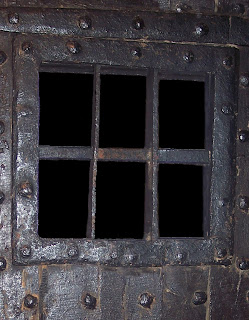 Before the regular police force was established, watchmen took responsibility for law and order. They were paid a modest wage, and could also earn rewards for catching criminals. Rather than being a centralised force, they were under the control of each parish. Those in Saint Paul's Deptford had a watch house, useful as a place to lock up wrongdoers until they could be dealt with. However, the Metropolitan Police Act 1829 meant the transfer of policing from local watchmen to the new London-wide force, and it seems that the parish then decided to dispose of the building.

To get an idea of what the watch house was like, one of our best sources is in fact the information produced preparatory to its demolition. Cleverly, the building's fabric was auctioned off - not only did this raise money, but the requirement that the materials be removed in three days was a clever way of getting the building demolished.

The list of lots suggests a very sturdy building with plenty of oak, stone and ironwork:

Fascinating. I love the way in which bits of old buildings can move around and be recycled - lumps of medieval abbey in the walls of my neighbour's house and my local pub, Roman pillars re-used at gateposts, etc, etc. One wonders who bought items such as the iron-bound doors, and what they did with them. Real Iain Sinclair territory.

I would have quite liked the stout oak floor myself!

Yes, old buildings never die - they are just recycled into other structures. There must be bits of this one around somewhere in the vicinity.

Yes, hear, hear to the two previous commenters - old buildings getting re-built or partially so elsewhere: a very useful reminder for those of us who are sentimentally inclined to mourn the 'loss' of a demolished one.
And what is this I read about watchmen getting bonus above modest stipend for banging to rights in bulk? Nothing new about the target culture, then!

Absolutely, reuse is the best form of recycling! Adam, I agree that bits probably survive - if so, I'd love to know where.