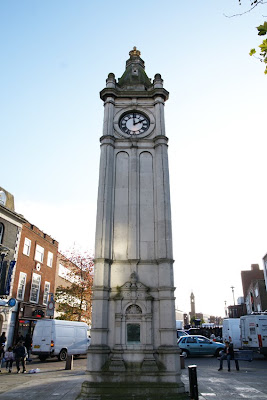 Across the road from Tower House is another Lewisham tower: its clock tower. Erected to commemorate Queen Victoria's diamond jubilee in 1897, there's even a crown on top to highlight the royal association.

A plaque near the base explains that the clock was paid for by public subscription, 'supplemented by a grant of £500 from a fund bequeathed to the parish by Michael Thomas Whitehall of Catford'. Lewisham District Board of Works provided both the site and the maintenance. Even the architect (A R Gough) and builders (Jerrard & 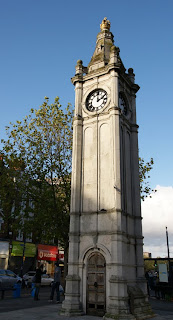 Sons) get a mention. At the top of the plaque is the inscription VR & I, which can be puzzling at first sight: who is the 'I' pairing themselves with Queen Victoria? It's actually just part of her title: 'Imperatrix', or Empress.

The clock tower may have stood in Lewisham for over a century, but it hasn't always stood on the same spot. When the High Street was remodelled in the 1990s, the clock's position was changed slightly.

My favourite feature is the little door at the back: rather charming unless, perhaps, you were the person responsible for winding the clock in this tiny, windowless space.

The late Victorians built great public monuments, in Britain of course but also across the Empire. I have found wonderful clock towers, ceremonial gates, pavilions and all sorts of other small architectural objects.

After Queen Victoria's jubilee and after the Boer War, these buildings went up at an even faster rate.