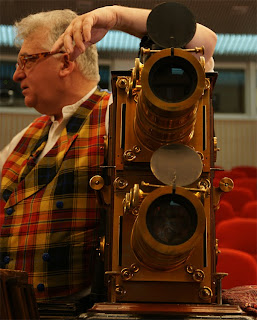 On Saturday the British Library held a day of events to accompany its excellent Points of View exhibition, including a magic lantern show. With my enthusiasm for period entertainments, I booked a ticket right away!

'Professor' Mervyn Heard is a leading researcher and collector of magic lantern slides and brings them to life with the essential element of showmanship. Forget watching endless 35mm slides of other people's holidays - magic lantern shows were very different. They included impressive elements of movement, both within the slide itself and by moving between slides. The scenes were, crucially, accompanied by the showman's patter. In other words, they offered a performance (even the temperance movement, with its dry reputation, produced slides telling comic stories).

Prof Heard recreates the experience not only by using original slides from the eighteenth century onwards but also by accompanying them with the stories, jokes, interaction and information which made the original shows so popular for so long. Although we think of them as a quintessentially Victorian entertainment, they date back much further (Samuel Pepys watched a show in 1666) and the earliest slides we saw were from the eighteenth century. People travelled the country carrying their lanterns and collections of slides, putting on shows as they went.

As the nineteenth century progressed these contraptions grew in popularity and became a staple for organisations such as missionary groups, temperance societies, workers' institutes and others - as well as making their way into homes. Alongside this, an industry grew up producing slides on a wide range of themes from optical illusions to scenic views around the world.

The magic lantern's popularity declined in the twentieth century, in part overtaken by cinema. However, Prof Heard's show enables us to appreciate film's predecessor and its own capacity for creating lively, animated scenes.

Further information
There will be a longer show at the British Library on Sunday 29 November; Prof Heard is also giving an illustrated lecture on 'Phantasmagoria-mania' at the Old Cinema, University of Westminster this Thursday.

Points of View is a free exhibition exploring nineteenth-century photography. Highlights include original Fox-Talbot negatives and prints, along with innumerable other innovations and images from around the world, all placed in their wider context. It runs until 7 March 2010.