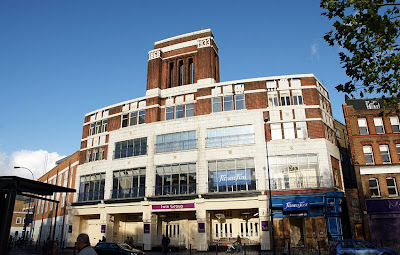 Near the clock tower in Lewisham is a rather fun building - look above street level and you'll notice ships with smoking funnels, trains and lorries decorating the facade. At the top are the bold dates 1868 and 1933 - the latter being the year it was built. The site had previously housed G Stroud, a large drapers' store. 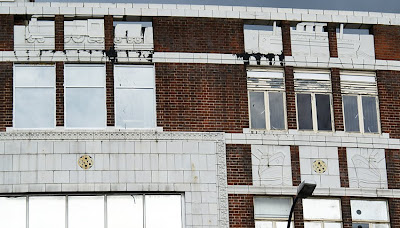 Originally known as Tower House, this building was the Royal Arsenal Co-operative Society's flagship department store (see it in a photo from 1934). That makes sense of much of the decoration including the lorry bearing the letters RACS and the prominent 1868 - the year of the Society's foundation. The reason for the transport theme is less obvious.

RACS may have begun as a food shop in Plumstead, but it grew to offer a huge range of products and services: books, jewellery, shoes, pharmacy, catering, hairdressers, laundry, travel agency, hotels, life insurance and even an undertaker's. It constructed housing on the Bostall Estate, had an education section and was politically active. Around 1975, the society counted half a million members - but a decade later it had declined drastically and merged with the national co-operative society.

I love that building with it's little trains and boats. Thanks for sharing its fascinating history!

Thank you! I wish I knew why they chose the transpot theme, though.

I've walked past that building many times, but never noticed these details.

I remember being delighted on noticing this years ago while standing at the bus stop opposite. I suspect the travel theme might have been chosen simply because it was the fashion at the time, especially the ocean liners. The trains may have referred to the earlier date, the foundation of the society. In the words of Blackadder, just a wild stab in the dark...

What's with the tower at the top and what is there now?

Dame, I think you're probably right - a 'proper' reason would be more satisfying though!

Adam, I think the tower is just showing off. It now houses a gym, a wine bar (although I'm not sure that's still open - the signs say 'Twin Group' now) and possibly offices.

Interesting building, and equally interesting enterprise: perhaps time for a revival of co-operatives?

I worked in that building from 1968 until 1975, it had a massive refit inside in 1970, i worked for the Co-Op until 2006. Still have such fond memories of working in Tower House, an era that has now gone, when customer service was a premium!!

Great post, answered my question perfectly while standing at the bus stop, wondering what the building was :-)

During WW2 I lived next door to Mr & Mrs Ackroyd in New Eltham, he had been, to the best of my knowledge, the architect responsible for Tower House. Their house, though basically similar to ours, has a fitted kitchen way ahead of its time in England.