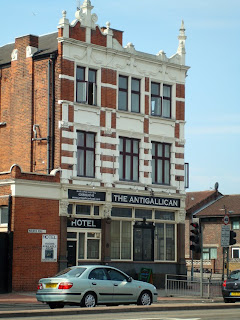 Here in Brittany there's plenty of evidence of mutual affection between Britain and France. However, the relationship isn't uniformly happy; in the past, it was often downright hostile.

Of course, being at war with France didn't help - the Seven Years' War of 1756-1763 and the Napoleonic Wars of 1799-1805 marked low points in Anglo-French relations, and the distrust between these neighbours persisted through much of the nineteenth century.

The Antigallican (anti-French) movement has earlier origins, though. It began in opposition to a cultural invasion of Britain by French goods and fashions. Thus the Anti-Gallican Society was founded around 1745, meeting in London's taverns (but not drinking claret!). Among its activities to stem the influx of French goods were prizes for local products. On its crest, St George was prominent - although his 'dragon' was a French flag.

In 1779, a privateer ship named the Antigallican sailed from Newcastle - and even had a song celebrating it. To the disappointment of its crew and investors, it returned after six months without having secured any prizes.

After the Napoleonic Wars, the whole Antigallican thing gradually went out of fashion and many of the wave of Antigallican pubs, inns and taverns quietly changed their name to something more in tune with the times. The name persisted on Tooley Street until a few years ago, but the pub facade (now nameless) has been incorporated into a modern building. One of the few survivors, though, still trades on the Woolwich Road at Charlton.

Thank you for filling in the background to this pub name. The building intrigued me when I passed it a while back on an expedition to find one of the locations of the film Blow Up, but I'd not got round to finding out more about it.

I was intrigued when I passed it, too - I assumed that the name was a relic of the Napoleonic wars so it was fun to find out that it probably dated back even further.

I used to live round the corner from that pub. It was awful, but all the pubs in Charlton were awful.

I always wondered about the name of this pub, but always forgot to look it up by the time I got home! A fascinating story!